Ethiopia’s State of Emergency Seen as Tool to Silence Dissent

It’s been five months since Ethiopia declared a state of emergency in response to widespread protests and unrest, and there are no signs indicating when it might be lifted.

Since then, thousands have been arrested and sent to military-style camps, where they live in squalid conditions, perform strenuous exercises and, according to Befeqadu Hailu, a former detainee, are often beaten if they deemed unsuccessful.

The prisoners have also undergone so-called “re-education” training, including a crash course on the country’s constitution.

“We didn’t have access to either family and friends, visitors or lawyers, so we didn’t have any contact to the outside world,” said Hailu, speaking to VOA shortly after his release.

Hailu is part of a group known as the Zone 9 bloggers, who were acquitted last year of charges of inciting violence under Ethiopia’s anti-terrorism law. Hailu was rearrested in October after he was interviewed by VOA’s Amharic Service.

Despite the release of about 20,000 detainees, top opposition leaders remain in jail. Most have been charged under the Ethiopia’s anti-terrorism law, which is often used to stifle dissent and arrest journalists. 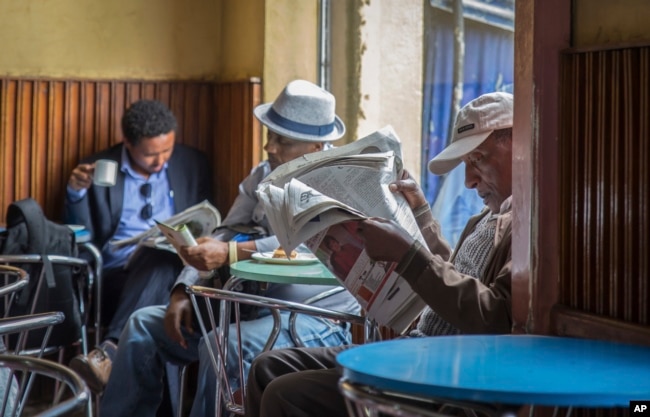 Ethiopian men read newspapers at a cafe in Addis Ababa, Ethiopia on Oct. 10, 2016. Ethiopia’s government on Monday blamed Egypt for supporting outlawed rebels and forcing the declaration of the country’s first state of emergency in a quarter-century as widespread anti-government protests continue.

Earlier this month, several opposition members were charged with an attempted coup, including Jawar Mohammed, who runs the Oromia Media Network based in Minnesota, and Berhanu Nega, an opposition leader who had previously been sentenced to death. Both men are outside the country.

Another man, Merera Gudina, chairman of the Oromo Federalist Congress, was arrested in Ethiopia after returning from a trip to testify before the European parliament about human rights violations.

In a statement to the U.S. Congress this week, Human Rights Watch condemned the state of emergency as an effort to undermine expression and crush dissent without addressing underlying concerns about representation. ( and )

Ethiopian officials insist the state of emergency is stabilizing the country.

“As of now, the state of emergency has accomplished its goal,” said Prime Minister Hailemariam Desalegn, speaking to reporters in January.

René Lefort, a journalist who has covered the region since the 1970s, believes the government’s actions reflect a power struggle between the federal government and regional police forces. 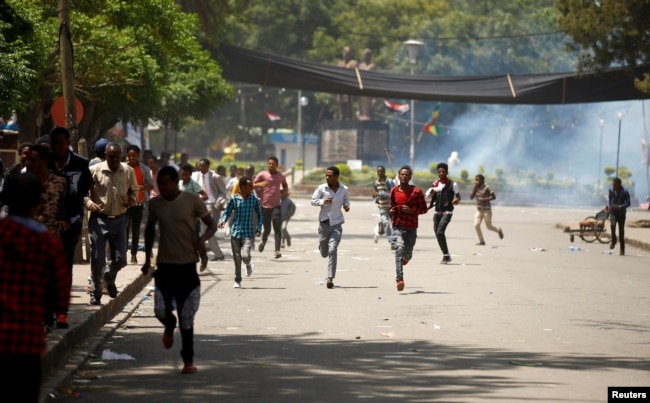 Protesters run from tear gas being fired by police during Irreecha, the thanks giving festival of the Oromo people in Bishoftu town of Oromia region, Ethiopia, October 2, 2016

Ethiopia’s ruling party, the EPRDF, has engaged in dialogue with opposition members, but Lefort said they are yet to make meaningful concessions.

With protests and violence subsiding, he believes real progress may be possible if the EPRDF is willing to meet the opposition’s demands.

“We’re in a crucial period,” Lefort said. “Now that Ethiopia is relatively calm, we will know if the ruling power is really ready to discuss [things] with the opposition and to make some steps in the direction of the opposition.”

The opposition currently has no power in the national government. The EPRDF controls all 547 seats in parliament.

Alex de Waal, a research professor at Tufts University’s Fletcher School of Law and Diplomacy, said the long-term solution for the country must come through reconcilation, not revolution. Diaspora efforts for an armed insurrection and overthrow could be disastrous for the country.

“It is reckless and irresponsible to go over armed insurrection. I think what we are seeing at the moment is an onpass where those [in] the internal domestic opposition in Ethiopia, Ethiopian civil society, recognize this, and their leaders are pressing for a reform rather than a revolution agenda,” de Waal said.

“I’m absolutely sure that’s the right way to go. The government is dragging its feet in responding, and we hope they don’t drag their feet, they do respond with more alacrity.” 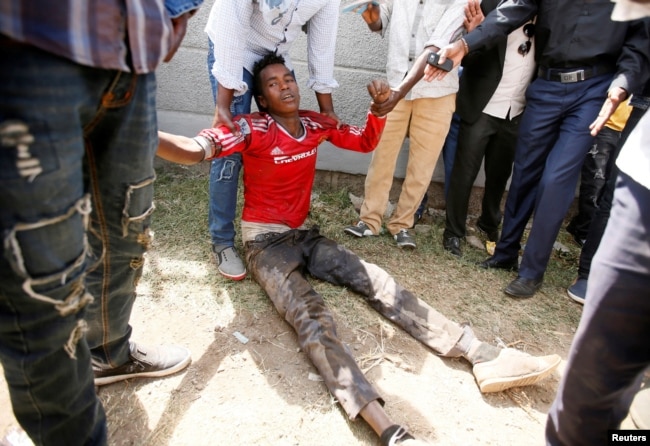 People assist an injured protestor during Irrechaa, the thanks giving festival of the Oromo people in Bishoftu town of Oromia region, Ethiopia, October 2, 2016.

Pointing to the outcome of the Arab Spring, de Waal said that similar efforts could be perilous and a hit-and-miss affair.

“One hopes that there will be the kind of open dialogue and the kind of willingness to reform among the leadership and respond to the very authentic legitimate, heartfelt demands of the people to democratize Ethiopia.”