“I feel like I have been given a second life by the doctors and nurses here.”

MSF/Awad Abdulsebur
Habatamu Abayneh arrived in Kebridehar recently and was supposed to start a new job in construction. But two weeks later, he fell ill with acute watery diarrhoea.

The spread of acute watery diarrhoea across Ethiopia in the last year has claimed many lives and affected thousands through severe dehydration. Médecins Sans Frontières has been working with the Regional Health Bureau to intervene rapidly in communities suffering from this potentially fatal disease.

Habatamu Abayneh arrived in Kebridehar recently and was supposed to start a new job in construction. But two weeks later, he fell ill with acute watery diarrhoea (AWD). When he was brought to the Kebridehar Case Treatment Centre (CTC) he was unconscious. The friends who brought him for treatment thought that he might be dying.

“While I was afraid of dying, I especially did not want it to happen so far from home where I am a stranger,” Habatumu explains.

He now sits up comfortably, smiling in his bed in the Kebridehar Case Treatment Centre (CTC) managed by MSF in the central Somali Region.

He is steadily recovering from the potentially fatal condition.

“I feel like I have been given a second life by the doctors and nurses here,” he says. “But it’s not just me. My whole family depends on the money I can earn, and without it, I fear they will be destitute.”

AWD spreads through bacteria in stools when sanitary conditions and personal hygiene are poor. It can spread quickly with population movements and increase the burden on public health systems.

The symptoms of AWD can include nausea, vomiting and diarrhoea. In extreme cases, the loss of fluid can be up to one litre every hour, which can ultimately lead to rapid dehydration and then death, if not treated. Only about one in ten infected people develop the typical signs and symptoms of AWD, usually within a few days of infection.

Fortunately, if given the right treatment, most people make a rapid recovery. 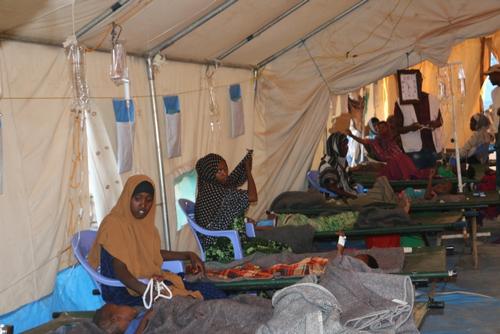 Speed is the key to treatment

Since March 2016, thousands of cases of this communicable disease have been detected and treated in Ethiopia with the full support of the Regional Health Bureau.

MSF first started to treat patients in Gedeo in the Southern Nations, Nationalities and People’s Region state (SNNPR). The disease then further spread to the capital Addis Ababa, the Somali Region and Oromia.

Between July and mid-January 2017, MSF treated over 7,200 cases in the Somali Region.

“We needed the rapid intervention of MSF and the Regional Health Bureau to bring the level of AWD down in the towns and villages surrounding Deghabour,” says Beshir Mohammed, the director of Deghabour hospital, where MSF is based.

“We have learned a huge lesson in dealing with this outbreak which will influence how we deal with future outbreaks.”

The partnership between the Regional Health Bureau and MSF allows CTCs and CTUs (smaller units) to be set up in areas where there is a significant number of cases.

“The key to treatment is speed”, says Kate Nolan, MSF’s head of mission for Ethiopia. “If we can get into an area when the first cases are detected, we set up our CTCs and can reach as many people as needed.”

“And there are other ways of reducing the incidence of this illness which need the full cooperation of all aid agencies with the capacity to intervene,” Nolan explains.

“Through improving the water and sanitation in certain areas we can have a real impact. We can also educate the populations on how to keep their families safe.”