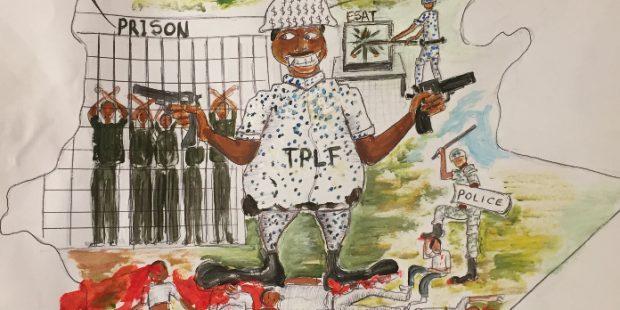 “Silence in the face of evil is itself evil. God will not hold us guiltless. Not to speak is to speak. Not to act is to act.”

The quote is taken from Dietrich Bonhoeffer, a German Lutheran Pastor who participated in the resistance against Nazism;he was clearly saying do not sit back and tolerate evil.  We believe the quote is timely for all Ethiopians facing government-sponsored terrorism,especially during the current martial law.

It has been six months since Ethiopians have been subjected to complete isolation and terrorization by a terrorist government that has never been democratically elected.  This should be noted as there was no fair election in the country since 2005 when people completely rejected the current government that killed peaceful demonstrators, put opposition members in prison and played stupid games with legitimate votes to come out as the leader despite the overwhelming rejection.  As Dr. Merera Gudina puts it clearly, the two weapons that allowed TPLF to survive for over twenty years are (1) TPLF controlled election Board that has no shame allowing elections without real opposition and keeps cheating and stealing votes to claim 100% win and (2) TPLF controlled killer Police and Military force with 90% of its leaders from a single ethnic group that are also TPLF members.

Over the years Ethiopians in various parts of the country demanding democratic rights have faced assassinations, imprisonments, and tortures.  Mass killings have been carried out in Gambela, Ogaden, Amhara, and Oromo regions to suppress opposition. Police have been given orders to shoot directly on peaceful demonstrators and families have lost their loved ones and some of us are still silent as if the killings are justified.

It is not secret that the government has given discriminatory employment preference based on political affiliation and ethnic association.  There are a lot of cases where a person from one ethnic group is selected for important positions just because of ethnic association.  This has been going for a long time now, and Ethiopians have been very patient and have given TPLF a chance to mature and grow beyond its narrow ethnic interests , however the ego to control and suppress others became more notable over the years than the desire to democratize and be fair.  This was also well describes by Dr Merera when he said “TPLF did come out of the jungle, but the Jungle has not left TPLF”  Over the years there is a calculated move by these corrupt leaders to control resources in all over the country via displacement and elimination of indigenous people.  The Anuak massacre of 2003 is a good example where the government incites ethnic cleansing and kills thousands to overtake the land for Tigray Ethiopians that are complicit with its crime and most of us were silent.

The so called EFFORT (Endowment Fund for Rehabilitation of Tigray) is another example of a ploy to use government as a mafia type organization rather than a neutral governing body.  It is no secret for Ethiopians that the government has been involved in unprecedented corruption doing businesses in the country.  EFFORT which is organized in the name of the people of Tigray was allowed to become an economic dominant force in the country favored by tax breaks and intentionally created loopholes.  All business dealings have been done using more than sixty organizations under it. No conflict of interest is known to these hoodlums, banks have been pouring money in the name of loans for these organizations (illegal), and businesses run by others have intentionally been weakened to facilitate big market share and bankrupt competitors (illegal).  In some instances money borrowed from banks for purposes of development has been funneled directly to foreign banks.  A lot of foreign aid for farmers has been tunneled to benefit EFFORT and its affiliates in the name of development and poverty reduction.  In short EFFORT is used to steal resources to enrich few TPLF members and their families.  Again when TPLF is and has been stealing hundreds of millions of dollars from poor Ethiopians most of us are silent.

Most Ethiopians hoped this narrow minded party will learn from its mistakes and change its strategy.  People have hoped that when ruling a big, diverse and resourceful country TPLF would improve itself and get out of purely ethnic based interests and be inclusive.  However more than twenty years of TPLF rule have shown the party and its cronies are entrenched in ethnicity and there is nothing that will make them change. So it is inevitable for the good of Ethiopia and Ethiopians TPLF be removed from power. There will not be peace between Ethiopians and TPLF leadership as it is synonymous with Evil and stands for Terrorize People & Lie Forever (TPLF). 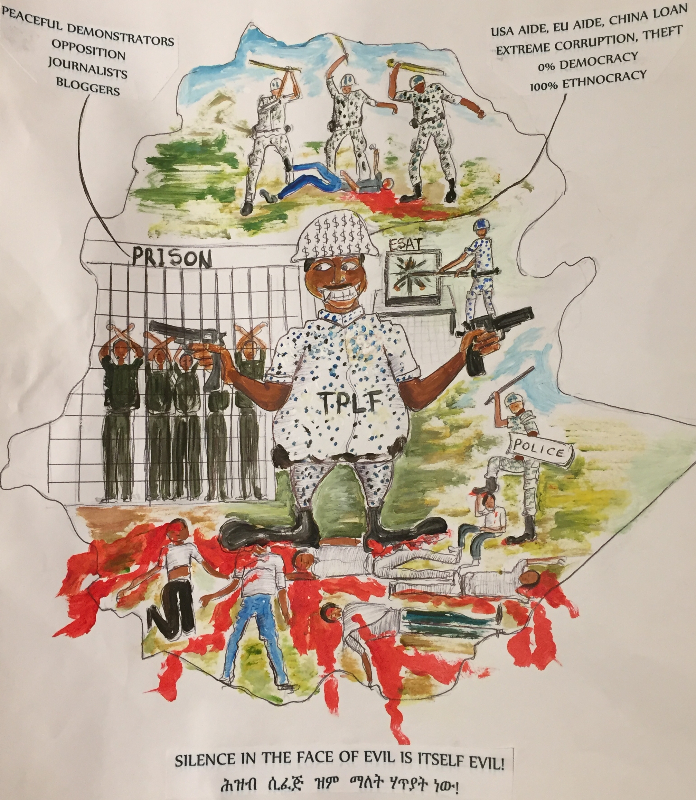 As one of the poorest countries in the world subjected to unimaginable poverty over the years, the promotion of ethnicism by TPLF as the ideology for organizing Ethiopians is leading the country to extreme poverty and a dangerous path of destruction.  Not only are things getting worse for more than 98% of its people but ethnic politics is also a threat to the existence and development of Ethiopians and Ethiopia as a country. An article written by Professor Worku Abera of Dawson College defines ethnic politics as “the art of devising, promoting, and exploiting ethnic discord to appropriate scarce resources for a narrow end. Resources include political power, land, capital, and employment, specifically employment in government bureaucracies and state-owned enterprises.” Therefore, ethnic politics legitimized by the ruling party is not the answer rather a bigger problem to Ethiopia; as a result we should all stand up against and fight it for the good of our people and the existence of our country.  All ethnic groups in Ethiopia should be united and organized to fight and condemn divisive ethnic politics perpetrated by TPLF which could lead to ethnic cleansing.  We should celebrate our diversity and unite under Ethiopian nationalism or “Ethiopiawinet” which is the cement that holds us all together and which gives a voice to all Ethiopians including millions that are of mixed ethnicity whose existence is not even considered by the sitting government.  We should all say no to second class citizenship and work hard collectively to solve problems and alleviate poverty and prosper together as one nation.

At this time, people all over the country are crying for help, and the intention by TPLF to terrorize Ethiopians and crash any opposition in and around Oromia and Amhara regions is resulting in imprisonments of thousands of youth in malaria infested areas.  Amhara and Oromo youth are being used for hard labor left to die without food and drinks and tortured and terrorized every day to prove to them that their demand for democratic rights is controlled and will not be allowed by the current Ethnocratic government.  Under TPLF humanity is lost, terrorizing and intimidating people while talking about fake democracy has become very common.  The imprisonment of prominent leaders like Dr. Merera, Bekele Gerba, journalists like Eskinder Nega, Khalid Mohammed, Darsema Sori and bloggers like Temesgen Desalegn, Seyoum Teshome is clear indication that TPLF doesn’t care about people’s demands and intends to rule by force as long as it could.

All atrocities’ are committed without anyone looking.  While there is only less than 5% internet access and limited number of cell phones, the government closed all communications so that others will not witness its cruelty.  It removed dishes and broke TV in individual houses so that people could not access news from outside newscasters like ESAT, Aljazeera and BBC.  No UN or other independent human rights groups are allowed to check on living conditions of political prisoners.  And no investigations by independent bodies were allowed on killings of peaceful protesters.  Some of us are still quite.

Untold horror stories that came out recently include dragging of corpse of Amhara youth killed in Welkait.  Ethiopians consider the dead as closer to God and dead bodies are treated with a lot of respect and burial of dead family members involves days of traditional ceremonies, putting dead family member to rest is a sad but very important part of life, however even that God given right is taken away from Ethiopians by TPLF.  This is extreme punishment and terrorization of anyone who dare to speak against it.  How could anyone justify this cruelty and most of us are still silent.

TPLF has never told the truth since day one, and is a known chief data manipulator (population, economic growth etc).  It never disclosed its intentions to dismantle the country in ethnic lines to empower itself, but has done it and is proud of it.  It always says it is democratically elected however that never happened and more than 90% of Ethiopians will testify to that.  It always says it is against corruption however it is operating like a mafia organization rather than a governing body, tunneling all resources and capital via ethnic association.  Never cared about conflict of interest in the way it operates for 25 years.  It says it allows for demonstrations, but gives its military and police an order to kill and terrorize protestors. It encourages ethnic cleansing to keep itself in power and yet talks about possible ethnic cleansing if it is removed from power. When TPLF talks about negotiations, it is always negotiating with made in TPLF parties (with small parties created by TPLF for the sake of appearances intended to skim western countries for AID money and other support).

Based on its own fake statistical data, experts conclude the fact that when TPLF admits it has imprisoned 12, 000 Oromo and Amhara youth the real number is close to 48,000.  When the killer government admits it has killed close to 200 peaceful demonstrators it could be close to 2000.  As there is no statistical data on the number of tortured and assassinated there is no way to estimate those causalities.

Despite our ethnic affiliations, Ethiopians living in democratic countries and enjoy/witness the fruits of democracy and unity should condemn the extreme brutality, ethnocracy and corruption by TPLF.  TPLF is standing on shaky grounds, and we do believe its days in power are numbered.  We should all break the silence, rise and say enough is enough and hope Ethiopians will soon have a day in court with the real terrorist in town (TPLF).

Martin Luther King. Jr. once said: In the End, we will remember not the words of our enemies but the silence of our friends.

Egypt and Ethiopia meet in Russia over mega dam dispute