News Sky -The system, set up on a converted golf course, fuels residents’ fears they will be a target for Pyongyang retaliation. 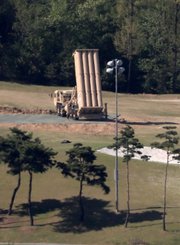 A US anti-missile defence system deployed in South Korea is now operational and can defend against North Korean missiles, Seoul has said.

South Korean officials, however, told the Reuters news agency it would not be fully operational for some months.

The system, set up at a converted golf course in Seongju, in the country’s southeast, has sparked controversy.

China sees the system as a threat, and experts have debated whether its security benefits would outweigh possible drawbacks if relations with Beijing worsen. Some are also angry at US President Donald Trump’s statement he would make Seoul pay $1bn for it.