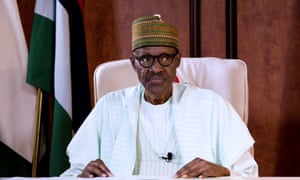 The president returned to Abuja on Saturday, after leaving Nigeria in May for his second course of treatment in Britain. He did not refer to his illness in the broadcast, but instead criticised calls for secession and regional divisions.

Calls for an independent south-eastern state of Biafra have intensified in the president’s absence, and large pro-Biafran protests have been staged.

Buhari said he was open to a dialogue but that Nigeria’s unity was “settled and non-negotiable”, adding that ethnic violence was being fuelled by “political mischief-makers”.

According to Amnesty International, more than 150 people have died in largely peaceful pro-Biafran protests since 2015. Amnesty said more than 100 activists were arrested in May, days before the 50th anniversary of the start of the Biafran war.

In the past few months, political groups in the mainly Muslim north of the country have issued threatening “quit notices” for Igbos and other south-eastern ethnic groups to leave their region in response to the calls for an independent Biafran state.

The Northern Youth Coalition has issued a 1 October deadline for ethnic Igbos to leave.

In his televised address on Monday, Buhari said he had followed events in Nigeria closely while in the UK and was concerned by calls of secession.

“I was distressed to notice that some of the comments, especially in the social media, have crossed our national red lines by daring to question our collective existence as a nation. This is a step too far,” the president said.

Condemning the notices to leave, Buhari said: “Every Nigerian has the right to live and pursue his business anywhere in Nigeria without … hindrance.

“We shall not allow irresponsible elements to start trouble,” he said. “This is not to deny that there are legitimate concerns. Every group has a grievance. But the beauty and attraction of a federation is that it allows different groups to air their grievances and work out a mode of co-existence.”

Buhari’s speech also addressed resurgent attacks by the Islamist militant group Boko Haram. In December the military claimed to have technically defeated the group, but attacks in north-eastern cities have increased significantly in the past few months, with universities, refugee camps, villages and oil workers targeted. The humanitarian crisis in the north-east has worsened significantly over the past two years, with a surge in malnutrition. Over the past seven years, the uprising has killed more than 20,000 people and driven 2.6 million people from their homes.

“We are going to reinforce and reinvigorate the fight against elements of Boko Haram, which are attempting a new series of attacks on soft targets,” said Buhari. “I am charging the security agencies not to let the successes achieved in the last 18 months be a sign to relax. Terrorists and criminals must be fought and destroyed relentlessly so that the majority of us can live in peace and safety.”

More than half-way through his term, Buhari has returned to a country still in recession, with the global fall in oil prices damaging Nigeria’s oil-reliant economy. His administration has promised that the recession will not last, but reforms to diversify the economy have failed to have enough impact.

… we have a small favour to ask. More people are reading the Guardian than ever but advertising revenues across the media are falling fast. And unlike many news organisations, we haven’t put up a paywall – we want to keep our journalism as open as we can. So you can see why we need to ask for your help. The Guardian’s independent, investigative journalism takes a lot of time, money and hard work to produce. But we do it because we believe our perspective matters – because it might well be your perspective, too.

I appreciate there not being a paywall: it is more democratic for the media to be available for all and not a commodity to be purchased by a few. I’m happy to make a contribution so others with less means still have access to information.Thomasine F-R.

If everyone who reads our reporting, who likes it, helps to support it, our future would be much more secure.

Tensions on the Korean peninsula remain high, as U.S. and South Korea began its latest series of war games on...