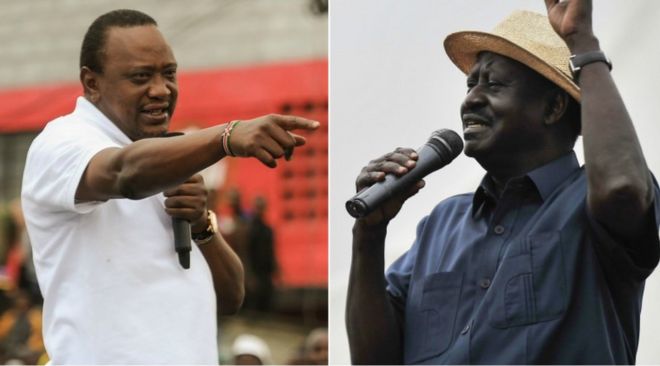 Via – from  BBC – Kenya election: Date set for Kenyatta-Odinga re-run

Kenya’s presidential election will be re-run on 17 October after the original result was annulled, the chair of Kenya’s electoral body has announced.

Wafula Chekubati also confirmed that only President Uhuru Kenyatta and opposition leader Raila Odinga would be on the new ballot.

Mr Kenyatta had been declared the winner of last month’s vote.

But Mr Odinga complained of widespread irregularities and the Supreme Court declared the first poll void.

The decision is believed to be the first time in African history that a supreme court has upheld an opposition challenge in a presidential election and ordered a re-run.

In a ruling on Friday, Chief Justice David Maraga said the 8 August election, in which Mr Kenyatta won 54% of the vote, had not been conducted in accordance with the constitution, declaring it “invalid, null and void”.

They said that some members of the Independent Electoral and Boundaries Commission (IEBC) had committed “irregularities and illegalities” in the transmission of results.

The court ordered a new poll to be held within 60 days.

The opposition demanded that some IEBC officials be removed to ensure that the problems are not repeated in the second ballot.

In the shock verdict, the court said it would give further details about the decision within 21 days.

IEBC chair Wafula Chebukati said it was “imperative that a detailed judgement… is released in order to allow the commission to identify areas that require improvement”. 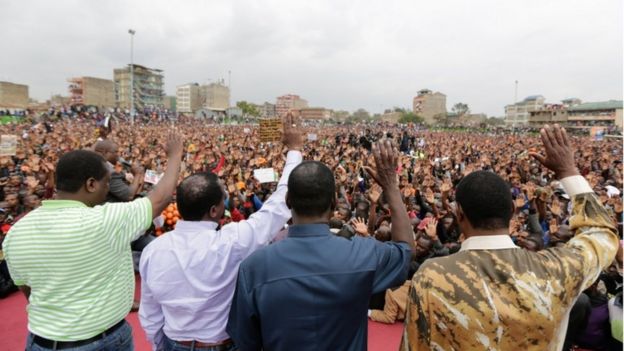 After the Supreme Court’s decision Mr Odinga called the electoral commission “rotten” and called for its members to resign and face prosecution.

It is the third time Mr Odinga has disputed national election results, having also lost against the sitting president in 2007 and 2013.

Mr Kenyatta initially called for calm after the decision in a television address, but later referred to the judges as wakora (meaning crooks in Swahili), saying they had “decided to cancel the election”.

The decision to only include Mr Kenyatta and Mr Odinga on the ballot has been controversial, with at least one of the six other candidates threatening legal action over their exclusion.

The poll had raised fears of major violence similar to that following a disputed vote in 2007, when post-election violence left 1,200 people dead.

Although the unrest after this year’s vote was not as serious as that in 2007, days of sporadic protests left at least 28 people dead.

The announcement of the date for the re-run of Kenya’s presidential election kicks off a series of events that will ultimately determine what kind of election Kenyans will have on 17 October.

The election commissioners have a tough task to win back the public’s trust after being criticised, mostly by opposition supporters, since Friday’s ruling.

The public will be watching to see if the electoral commission’s chairman, Wafula Chebukati, will follow through with his promise to restructure his team before the re-run to improve public confidence.

Eyes will also be on other groups including the international election observers, the Kenyan media and opinion pollsters – who are now perceived to have made the wrong call when it came to the 8 August presidential poll.