Communications Minister Ayoub Kara speaks to reporters prior to the weekly cabinet meeting at the Prime Minister’s office in Jerusalem on November 12, 2017. (Olivier Fitoussi/Pool/Flash90)

A Likud minister reportedly brought along a number of personal associates and real estate brokers on an official trip to Ethiopia in April without government authorization.

According to an Army Radio report Sunday, Communications Minister Ayoub Kara, who at the time was a minister-without-portfolio, never received official permission to invite his business associates and prominent party activists on the trip.

Upon arriving in Ethiopia, the group was also joined by Ze’ev Schiff, who the report said has business interests in the country. He is also the husband of Kara’s bureau chief, Shirley Schiff.

During the trip, Kara arranged meetings for the group with a number of top Ethiopian officials, including the foreign minister, agriculture minister, and the head of the country’s investment commission. The report said Kara was present at those meetings.

In addition to the meetings in Addis Ababa, Ethiopia’s capital, the delegation also visited Bahir Dar, a district in the north of the country with attractive land investments. Kara did not appear to have any official meetings while there, according to the report.

Upon their return to Israel, Kara’s associates used the contacts they made on the trip to try and broker land deals on behalf of Israeli investors, according to the report.

It was not clear from the report whether Kara requested permission to bring the delegation along but was denied, or never requested at all.

In response to the report, Kara defended the group’s presence on the trip, saying it was coordinated with Israel’s ambassador in Ethiopia.

“The inclusion of businessmen is the basis of any high-level visit to Africa,” Kara told Army Radio.

Kara, Israel’s first Druze minister, has previously landed himself in hot water for failing to coordinate his meetings abroad with the Israeli authorities. 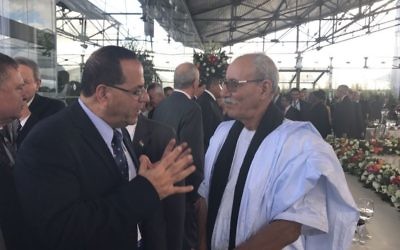 Likud Minister Ayoub Kara meets with prime minister of the Sahrawi Republic of southern Morocco, Abdelkader Taleb Omar in Ecuador on May 24, 2017. (Courtesy)

In June, Kara drew Morocco’s wrath after posting a photo of himself meeting Abdelkader Taleb Omar, the Prime Minister of the Sahrawi Republic of southern Morocco, at the swearing-in ceremony of Ecuador’s newly elected president.

Morrocco, sending a message via an Israeli embassy in Europe, protested the meeting between Kara and Taleb Omar, saying it could not tolerate such support of its neighbor-rival, Channel 2 news reported at the time.

The Sahrawi Republic is a partially recognized state that controls a thin strip of area in the Western Sahara region but claims sovereignty over the entire territory. Morocco, however, controls and administers the rest of the disputed territory and rejects any Sahrawi claims to it.

Israel does not have official diplomatic ties with Morocco but the north African state is considered one of the Arab world’s friendliest nations toward Israel.

Responding to the protests from Morocco at the time, Israel’s Foreign Ministry said the meetings were not coordinated or approved by the Prime Minister’s Office.

Ethiopia is legendary for its medieval, rock-hewn churches, the cruciform and colorful frescoes of which have attracted tourists from across the world. The ancient...