OPDO’S SILENCE ON BEKELE GERBA, OTHERS STILL IN JAIL, DETRIMENTAL TO ITS REFORMIST IMAGE 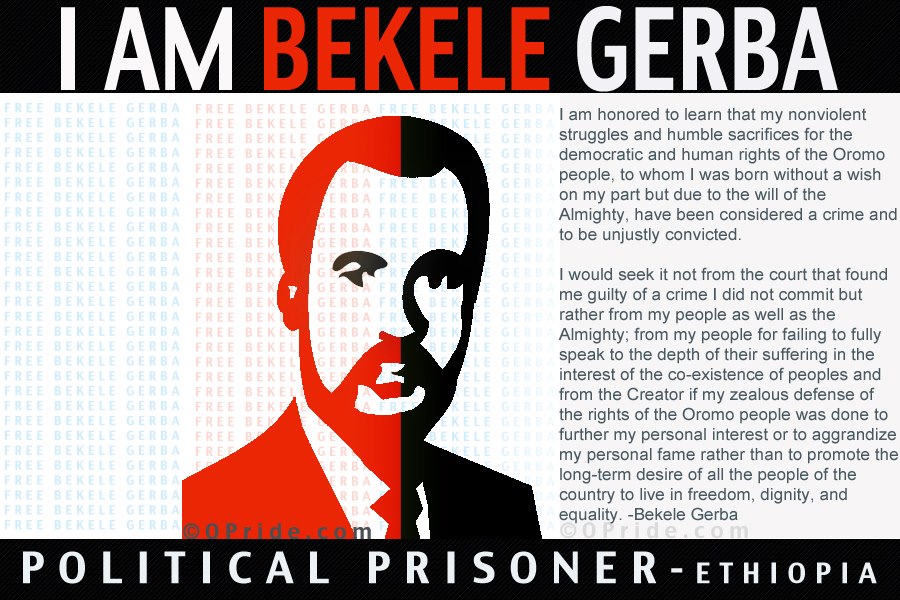 Opride/ Addis Standard – February 07/2018 — Ethiopia’s much-touted pledge to release political prisoners in order to foster national consensus and widen the democratic space turned out to be much ado about nothing. Thirty-five days after Prime Minister Hailemariam Desalegn announced plans to free some imprisoned political leaders and individuals only one such individual of consequence has been released. Several high-profile political leaders remain incarcerated along with tens of thousands in federal and regional prisons.

Authorities in Addis Abeba continue to send mixed signals about who might be released and when.

Bekele Gerba, the first Secretary General, and Dejene Tafa, the Secretary General, of the opposition Oromo Federalist Congress (OFC), who were among those widely expected to be released as part of the government’s amnesty, still remain in jail. In fact, since the January 3 announcement, Bekele and three of his co-defendants have been sentenced to 12 months in prison for contempt of court on frivolous grounds. Bekele has a chronic medical condition. His health has deteriorated over the past few weeks. Doctors say he is at risk of losing his eyesight and other organ failures due to a severe blood pressure he developed during his first incarceration in 2011. Last month, Bekele was taken to a local government hospital where he was treated for hypertension and was given a referral to see a specialist. However, the Qilinto remand center refused to take Bekele to Biruh Clinic, where the doctors recommended him to be treated.

Let us be clear: The injustice being committed against Bekele are unconscionable. One of the most prominent victims of the ruling Ethiopian People’s Revolutionary Democratic Front or EPRDF’s, perversion of the legal system and its weaponization of the courts, Bekele is not a run-of-the-mill criminal accused of robbery, murder or arson. He was and still is a principled and visionary leader who has become a defiant symbol of freedom and justice in Ethiopia, a symbolism that came to represent a mortal threat to the EPRDF regime. This is why Bekele’s terrorism charges, which were later downgraded to criminal charges, are largely regarded as the cause célèbre of political show trial in modern Ethiopia — a stage show tailored to eliminate him from the political space and consolidate the rule of the minority-dominated regime.

Bekele was first arrested with 22 other members of the OFC in December 2015, at the height of the Oromo protests, and was charged under the country’s notorious anti-terrorism legislation. Tried by a court system subservient to political domination, he was subjected to the most outrageous, cruel and fraudulent trial that would have made Joseph Stalin proud.

Indeed, this is not the first time Bekele was subjected to this absurd theater of oppression. In August 2011, he was arrested after meeting with delegates of Amnesty International and charged with terrorism. He was sentenced to eight years prison and released in March of 2015 after serving a reduced sentence of 3 years.

Bekele’s case exemplifies the mockery of justice in Ethiopia where the judicial system, the police, the prosecution, and prison authorities work in tandem to produce an outcome politically expedient to the regime. Police and prison authorities are above the law. Prosecutorial decisions, especially in politically motivated cases, are highly selective and politically-motivated. When courts issue rare rulings in favor of defendants, prison administrations routinely ignore them.

A case in point is the refusal of the Qilinto prison administration to release Bekele on bail when the country’s highest court granted him bail and ordered his immediate release. Prison officials and the office of the prosecution concocted a bogus excuse to buy time until the decision is overturned by judges appointed to the Cassation division by virtue of their political loyalty.

Bekele is an educator, a humanitarian, and a staunch proponent of nonviolent resistance. Despite the insinuations and accusations of the state, Bekele rejected violence as a means to accomplish democratic change in Ethiopia. He called for peaceful protests, insisting that the state must ‘free us all or jail us all.’ His courage, humility, tenacity, and ingenuity to change the political landscape for the better is evident in his exemplary sacrifice and his speeches in which he articulates and encapsulates the day-to-day concerns of average Ethiopians. His message of hope and redemption resonates far and wide among the young generation whose energy continues to fuel the relentless anti-government protests.That is why in calling for his release, activists and protesters throughout Oromia and Amhara, saw themselves in Bekele’s ordeal, thus their individual moral duty.

Last week, Ethiopians launched a social media campaign to demand urgent #MedicalCare4BekeleGerba. But authorities continue to deny him a critical medical care despite warnings that his condition, already life-threatening, is worsening.

Bekele’s continued detention and ill-treatment — especially in light of growing concerns over his failing health — may set off yet another nationwide unrest and could cause tumultuous repercussions in the country, particularly in Oromia. Online activists are already calling for nationwide protests demanding Bekele’s release, as well as the freedom of other unjustly detained political prisoners.

The Oromia National Regional State, led by a promising new breed of leaders, including Lemma Megersa, its president, continues to strike all the right notes. At its just-concluded central committee meeting in Adama, the Oromo People’s Democratic Organization (OPDO), the ruling party in Oromia, has announced a flurry of reform plans. It includes a decision to end corruption and favoritism in the national trade; a plan to work with Oromo opposition at home and abroad; a bold pledge to defend the independence and impartiality of the state-run Oromia Broadcasting Network (OBN), among others. However, it is deeply regrettable that OPDO did not even mention the fate of Bekele and other political prisoners in its statement yesterday. Ultimately, despite several demonstrable achievements, there remains a major gap between OPDO’s affirming rhetoric and its actions. While we have no reason to doubt the sincerity of their promises and the seriousness that underpins their words, so far, the OPDO leaders uplifting rhetoric lags behind their actions —much less meeting the outsized public expectations.

Since the emergence of Lemma and his team, the political wheels have undoubtedly turned and OPDO is no longer a native auxiliary of the Tigrayan People’s Liberation Front (TPLF). In fact, the prisoner release was widely reported as part of the concessions OPDO leaders won at the end of crisis talks by EPRDF executive committee last December. But OPDO’s silence on Bekele’s deteriorating health now risks unraveling the lukewarm public support and its budding reformist image. The party’s entreaties for calm and calls on the public to jealousy safeguard Oromo unity would fall on deaf ears unless this key demand is met: OPDO must unequivocally and publicly state its position on the continued detention and inhuman treatment of Bekele, including the denial of lifesaving medical care.

Further equivocation undercuts their trust with the public as Bekele’s detention has been the center of the movement calling for the release of political prisoners since 2015. Else, how would opposition groups meaningfully engage with the OPDO when they can’t even publicly comment on the failing health of one of their icons?

Silence doesn’t inspire confidence. Seeing Bekele denied acutely needed medical care and saying nothing is unacceptable. OPDO can still redeem itself. As they tout their accomplishments at the ten days long central committee meeting, OPDO officials have a unique opportunity to clarify the exact terms of the agreement it reached last month with EPRDF leaders and its own current position on Bekele’s health.

That is not all. The Oromia’s state media, OBN, has already shown glimpses of what a free media could do and be — pioneering a bright path for the whole country. Its coverage of the displacement and rehabilitation efforts of nearly a million Oromo civilians due to Somali Liyu police aggression was unmatched. It continues to entertain critical voices and report of illicit trade, illegal land grab, and official corruption. OBN’s “accountability journalism” has unsettled the powers that be in Addis Abeba. So much so that the head of Ethiopian Broadcasting Authority, Zeray Asgedom, recently characterized some of the network’s reporting as anti-state.

When Merera Gudina, the leader of Bekele’s OFC, was released last month, OBN went to his house and interviewed the veteran Oromo politician. Its extended coverage of Merera’s release was widely celebrated. On Feb. 3, Habtamu Hailemichael, of the OPDO Secretariat, pledged that the party is resolved to ensure that OBN doesn’t become a mouthpiece for one party or those in positions of power. It is a welcome and refreshing departure from the practice of the past where the broadcaster was essentially an agitprop known more for nauseating developmental journalism than critical reporting.

Bekele’s case is emblematic of the systemic miscarriage of justice in Ethiopia. We call on OBN to start covering the flagrant cases of maladministration of justice, including the trial of Bekele and his colleagues. The state-backed Fana Broadcasting and other local media regularly report on Bekele and other opposition leaders’ court cases. To wear its befitting badge as “the voice of the Oromo people” with honor, the onus is on OBN to set the example in covering Bekele disconcerting health situation and the theatrical and shameful court proceedings, which is undoubtedly a public interest story.

The greatness and blight of any society is judged by how it treats those entrapped by its wheel of justice. That is why the administration of justice goes to the heart of the Oromo protests that gripped the country since 2014. Consequently, we call on Ethiopian authorities to immediately and unconditionally release Bekele and all prisoners of conscience. Short of this, all promises of reform and opening the democratic space would ring hollow.