‘Freedom!’:- the mysterious movement that brought Ethiopia to a standstill

the guardian –  Tom Gardner in Adama

Today, Desalegn is a banker. But once he was a Qeerroo: a young, energetic and unmarried man from Ethiopia’s largest ethnic group, the Oromo, bound by what he calls a “responsibility to defend the people”.

Twelve years ago he helped organise mass protests against an election result he and many others believed the ruling Ethiopian People’s Revolutionary Democratic Front (EPRDF) had rigged. This landed him in prison, along with thousands of others, on terrorism charges.

Since then he has married and, like many of his generation in Ethiopia, mostly avoided politics. That was until 12 February, when he joined almost everyone in the town of Adama, and in many others cities across the region of Oromia, in a strike calling for the release of opposition leaders and an end to authoritarianism.

They are the vanguard of the Oromo revolution

The boycott, which lasted three days and brought much of central Ethiopia to a standstill, culminated on 13 February with the release of Bekele Gerba, a prominent Oromo politician who lives in Adama, and, within 48 hours, the sudden resignation of Ethiopia’s beleaguered prime minister, Hailemariam Desalegn. The shaken federal government then declared a nationwide state-of-emergency on 15 February, the second in as many years.

“It was a total shutdown,” says Desalegn, of the strike in Adama. “Almost everybody took part – including government offices. You wouldn’t have even been able to find a shoeshine boy here.”

For him and many other residents of Adama, about 90km south-east of the capital, Addis Ababa, there is only one explanation for how a normally quiescent town finally joined the uprising that has billowed across much of Oromia and other parts of Ethiopia since late 2014: the Qeerroo. 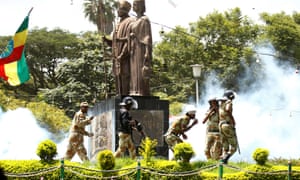 Who the Qeerroo are, and how they have helped bring one of Africa’s strongest and most autocratic governments to its knees, is only dimly understood.

In traditional Oromo culture the term denotes a young bachelor. But today it has broader connotations, symbolising both the Oromo movement – a struggle for more political freedom and for greater ethnic representation in federal structures – and an entire generation of newly assertive Ethiopian youth.

“They are the voice of the people,” explains Debela, a 32-year-old taxi driver in Adama who says he is too old to be one but that he supports their cause. “They are the vanguard of the Oromo revolution.”

The term’s resurgence also reflects the nature of Oromo identity today, which has grown much stronger since Ethiopia’s distinct model of ethnically based federalism was established by the EPRDF in 1994.

“In the past even to be seen as Oromo was a crime,” says Desalegn, of the ethnic assimilation policies pursued by the two preceding Ethiopian regimes, imperial and communist. “But now people are proud to be Oromo … So the Qeerroos are emboldened.”

As the Oromo movement has grown in confidence in recent years, so the role of the Qeerroo in orchestrating unrest has increasingly drawn the attention of officials.

At the start of the year police announced plans to investigate and crack down on the Qeerroo, arguing that it was a clandestine group bent on destabilising the country and seizing control of local government offices. Party sympathisers accused members of being terrorists.

Though many dispute this characterisation, few doubt the underground strength of the Qeerroo today.

Since the previous state of emergency was lifted last August, Qeerroo networks have been behind multiple strikes and protests in different parts of Oromia, despite obstacles like the total shutdown of mobile internet in all areas beyond the capital since the end of last year.

Bekele Gerba, the opposition leader, credits the Qeerroo with securing his release from prison, and for sending hundreds of well-wishers to his home in Adama in the aftermath. But like many older activists, he confesses to limited knowledge of how they organise themselves.

“I only became aware of them relatively recently,” he says. “We don’t know who the leadership is and we don’t know if they have a central command.”

But in a recent interview with the Guardian, two local leaders in Adama, Haile and Abiy (not their real names), shed light on their methods.

According to the two men, who are both in their late 20s, each district of the city has one Qeerroo leader, with at least 20 subordinates, all of whom are responsible for disseminating messages and information about upcoming strikes.

They say their networks have become better organised in recent months, explaining that there is now a hierarchical command chain and even a single leader for the whole of Oromia. “This gives us discipline and allows us to speak with one voice,” says Abiy.

Their job has become more difficult in the absence of the internet.

“With social media you can disseminate the message in seconds,” says Abiy. “Now it can take two weeks, going from door to door.” Instead of using WhatsApp and Facebook, they now distribute paper flyers, especially on university campuses.

The role of Oromo activists among the diaspora, especially those in the US, also remains crucial, despite the shutdown.

Zecharias Zelalem, an Ethiopian journalist based in Canada, argues that it is thanks to prominent social media activists that the Qeerroo have acquired the political heft that youth movements in other parts of the country still lack. He highlights in particular the work of Jawar Mohammed, the controversial founder of the Minnesota-based Oromia Media Network (which is banned in Ethiopia), in amplifying the voice of the Qeerroo even when internet is down.

“[Jawar] gives us political analyses and advice,” Haile explains. “He can get access to information even from inside the government, which he shares with the Qeerroos. We evaluate it and then decide whether to act on it.”

He and Abiy both dismiss the assumption, widespread in Ethiopia, that Jawar remote-controls the protests. “The Qeerroos are like a football team,” counters Haile. “Jawar may be the goalkeeper – helping and advising – but we are the strikers.”

The reimposition of the state-of-emergency has angered many Qeerroos in Adama and elsewhere in Oromia, where the move was widely seen as heavy-handed bid to reverse the protesters’ momentum.

Some analysts fear further repression will push members of a still mostly peaceful political movement towards violence and extremism.

Many in the government, as well as in other parts of the country, worry about a rise in ethnically motivated attacks, on people and property, and especially on ethnic Tigrayans, who make up about 6% of the population but are generally considered to dominate politics and business.

Late last year federal troops were dispatched to university campuses, in large part due to escalating ethnic violence, which included several deaths. There were reports of similar incidents during protests throughout the past month.

Jibril Ummar, a local businessman and activist, says that he and others tried to ensure the protests in Adama were peaceful, calming down overexcited young men who wanted to damage property and attack non-Oromos.

“It worries me,” he admits. “There’s a lack of maturity. When you are emotional you put the struggle in jeopardy.”

Gerba says he worries about violence, too, including of the ethnic kind. “We know for sure that Tigrayans are targeted most, across the country. This concerns me very much and it is something that has to be worked on.”

In the coming days the EPRDF will decide on a new prime minister, and many hope it will be someone from the Oromo People’s Democratic Organisation (OPDO), the Oromo wing of the ruling coalition.

This might placate some of the Qeerroo, at least in the short term. But it is unlikely to be enough on its own to dampen the anger.

“When we are married we will retire from the Qeerroo,” says Haile. “But we will never do that until we get our freedom.”