Putin wins his fourth term, but many eyes are on voter turnout in the face of an opposition boycott.

Putin addressed thousands on the Manezhnaya Square near the Kremlin with a short speech, thanking supporters for the election results.

“I see in this minimum a recognition for what I did in the past year under very complicated circumstances. I see in this trust and hope that we will continue to work as intensely and as responsibly,” said Putin.
“We have to preserve this unity. It’s very important to attract all these people who voted for other candidates to my side. We need unity in order to move forward.”
Turnout was 59.5 percent, according to the commission’s results. Before voting began, there were reports that Russian authorities were worried about a potential low turnout that could affect its perceived legitimacy. 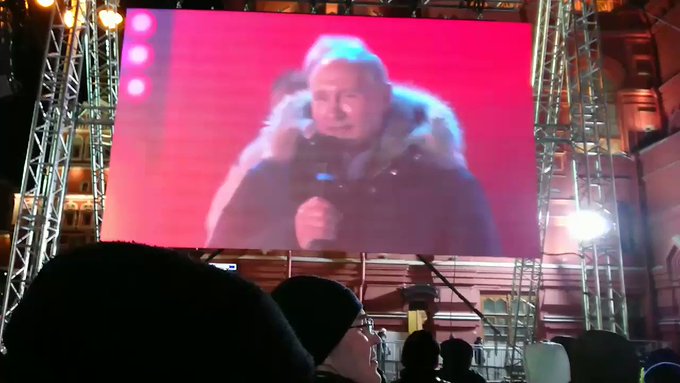 Opposition leader Alexei Navalny, who was barred from running in the elections over a fraud conviction in a court case he claims was politically motivated, called for a boycott of the vote, as did other political groups.
“It is too early to comment on the results because only 23 percent of ballots have been counted. But it is already clear that these elections weren’t fair,” said Grudinin at a press conference earlier in the evening.
“Unfortunately Navalny turned out to be right – that one could vote two or three times and we have examples of that in the Moscow region. It is clear that the counting of votes and in general all procedures of the elections were unfair.”
According to independent Russian monitor Golos, various tactics that local administrations employed in order to attract more voters to the polling stations were not successful.
“Various methods of boosting turnout of the vote, which the authorities undertook, did not bring the expected results. The big number of observers around the country were deployed and that brought about a relative balance,” reported the monitor on its website.
The majority of regions had similar turnout as 2012 and a few, such as Gechnya and Dagestan, turnout was slightly lower, because of the presence of observers.
The monitor registered more than 2,500 complaints of violations, with some 460 in Moscow and about 230 in St Petersburg.
Stanislav Andreychuk, a member of the board of Golos, told Al Jazeera that the scale of irregularities of these elections was similar to that of the last presidential elections of 2012.
State TV channel Rossiya 24 reported earlier there were complaints of violations but many were “fake”.
Close to 109 million registered voters were eligible to vote in 100,000 voting stations across the 85 regions and republics of the Russian Federation. Russian citizens were also able to cast ballots in 145 countries. 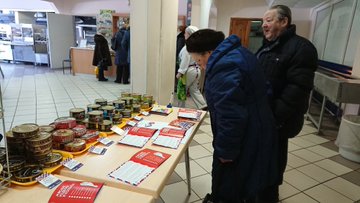 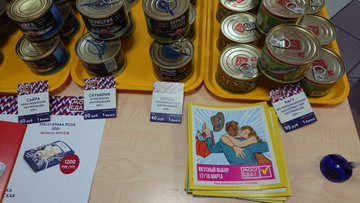 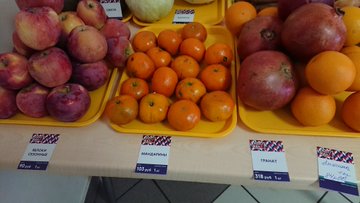 Higher turnout
Golos reported turnout in some regions in the far east was higher than the last presidential elections of 2012.

In the Moscow district of Babushkinskaya, where Al Jazeera shadowed election observers, there was a constant stream of voters since the morning. At the 532nd polling station, turnout grew from five percent at 10am to 35 percent by 2pm local time.
Pensioner Galina Prokopievna, 58, said she voted for Putin because she respects and loves him and likes how he works.
“He’s tolerant and intelligent. He knows how to deal with the world,” she said.
But in Babushkinskaya, there were also people who were boycotting the elections, or were not interested in voting.
“We don’t have elections. We are seeing what is happening in the country, it is the same candidates as the previous election,” said 32-year-old Katya, who refused to give her surname.
Student Kirill Belov, 18, said he supports Putin but didn’t vote because he thought his ballot would not make a difference.
“I just don’t see any sense in the elections. I feel like everything has already been decided,” he said.
Anton Mityakov, head of the district electoral commission, told Al Jazeera there were no violations reported in Babhushkinskaya district as of 12:30pm and pointed out that all polling stations had livestream cameras installed.
But Vladislav Kuznetsov, an observer for the Communist Party of the Russian Federation (CPRF), said stickers have been illegally added on election posters under the name of CPRF candidate Pavel Grudinin. The stickers claim he failed to disclose bank accounts in Switzerland.
According to Mityakov, the stickers were added after written instructions were sent by the Central Electoral Commission to do so – something Kuznetsov said was not true.

Asked about the music, activities and discount food sales organised in polling stations, the commission head said this was normal, as an election is supposed to be a “celebration” and there was a tender for companies that wanted to sell at polling stations.
“In any country, especially democratic ones, elections are a celebration when people come to cast their vote … Believe me, people are going to vote not because of the food,” he said.
Throughout Russia’s regions, there were reports of similar festive arrangements, including raffles and special sales to attract voters. Throughout the day, Golos also reported instances of ballot box stuffing, people being pressured to vote, and various other violations.
Residents of Crimea voted for the first time in Russian presidential elections. The vote was scheduled to coincide with the fourth anniversary of the annexation of the peninsula from Ukraine.
Crimea featured prominently in Putin’s election campaign and it was where he held his last rally on Wednesday.
Before the start of the vote, Andreychuk of Golos told Al Jazeera it was the first time he saw such mobilisation of local administrations trying to rally people to go vote. “We have never seen before an information campaign to boost turnout on such a scale,” he said.
This is the first vote that children have also been used in campaigning, with schools holding referendums or parent conferences on election day or making students engage in election-related activities to promote the vote, he said.
Russian news outlet RBC reported on Friday that the Kremlin has indicated that a turnout of 65 percent would be considered “good”. During the 2012 presidential elections, 65.3 percent of voters turned up to the polls.

Shares
2018-03-18
Previous Post: Ethiopia accuses Eritrea of trying to destabilise its security
Next Post: Time for Political Change and Social Unity in Ethiopia

Ethiopia accuses Eritrea of trying to destabilise its security

Accusations come as Ethiopia continues to be under a state of emergency since its former prime minister resigned. Ethiopia has accused...