Ethiopian Airlines positions itself to take over Africa’s skies – CNN

(CNN)In Africa’s battle for the skies, an east African carrier is stepping up its game in an effort to dominate the market.

The state-owned Ethiopian Airlines, Africa’s largest carrier by number of passengers, according toFlightGlobal, has taken stakes in a raft of carriers across Africa and opened routes to new destinations, like Manchester, UK.
The expansion is part of the airline’s 2025 Vision to become the leading aviation group in Africa, and increase the share of the market occupied by African airlines.
“Twenty percent of the market is carried by African airlines and 80% of the market is carried by non-African airlines,” said Tewolde Gebremariam, CEO of Ethiopian Airlines. “The market share has been declining for the last 20 years.”
Ethiopian Airlines is looking to fend off competition from South African Airways, the largest carrier by number of flights, according to FlightGlobal, EgyptAir, Royal Air Maroc and Kenya Airways. 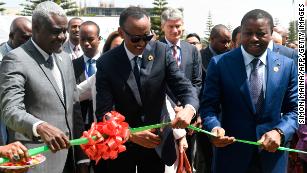 Sky’s the limit as Africa makes major move towards aviation single market
Tewolde told CNN that Ethiopian Airlines are expanding into West Africa with Togolese airline ASKY Airlines. They’re also doing business with Air Cote d’Ivoire, Congo Airways and have taken management of CEIBA International in Equatorial Guinea.
The airline has ambitious plans; Ethiopia is working with the Zambian government to relaunch their national carrier with a 45% stake, it also plans to establish a wholly-owned airline in Mozambique and has signed a contract to start an airline in Guinea. Ethiopian has also taken stakes in a Chadian airline.
“Typically, they’re taking a minority stake or around 50%. They tend to go into these joint ventures with local partners,” said Oliver Clark, senior reporter at FlightGlobal.

Ethiopian Airlines is launching new routes from Addis Ababa to Jakarta, Chicago and Geneva in the coming months.
The airline is looking to make the Ethiopian capital a transport hub, connecting other African countries without long-haul capacity with continents around the world.
“It’s trying to feed traffic from other African countries through Addis to then give them the connectivity to travel on to other continents, US, Europe and Asia in particular,” Clark said.
In 2015, Africa accounted for only 3% of air passenger traffic, according to the International Civil Aviation Organization. The growth of African airlines worldwide will seek to expand the number of travelers.

Prime Minister Abiy Ahmed has reshuffled directors of the board of the state-owned Metals & Engineering Corporation (MeTEC), appointing Ambachew...