Joachim Ronneberg, Leader of Raid That Thwarted a Nazi Atomic Bomb, Dies at 99

nytimes.com – The Norwegian saboteurs skied across the Telemark pine forest in winter whites, phantom apparitions gliding over moonlit snow. They halted at a steep river gorge and gazed down at a humming hydroelectric power plant where Nazi scientists had developed a mysterious, top-secret project.

Lt. Joachim Ronneberg, the 23-year-old resistance fighter in command, and his eight comrades — all carrying cyanide capsules to swallow if captured — had been told by British intelligence only that the plant was distilling something called heavy water, and that it was vital to Hitler’s war effort.

Hours later, in one of the most celebrated commando raids of World War II, Lieutenant Ronneberg and his demolition team sneaked past guards and a barracks full of German troops, stole into the plant, set explosive charges and blew up Hitler’s hopes for a critical ingredient to create the first atomic bomb.

Mr. Ronneberg, the last surviving member of the 1943 raid and one of the most decorated war heroes of a nation renowned for valorous resistance to the 1940-45 German Occupation, died on Sunday in Alesund, Norway, his daughter, Birte Ronneberg, said. He was 99.

Mr. Ronneberg and his saboteurs were showered with international honors after the war for what they had regarded as a suicide mission. It was celebrated in books, documentaries and films, notably Anthony Mann’s 1965 production, “The Heroes of Telemark,” starring Kirk Douglas, in what critics called a fact-flawed version of what had happened.

It was not until the war’s end in 1945 that Mr. Ronneberg learned the significance of the raid. “The first time I heard about atomic bombs and heavy water was after Americans dropped the bomb on Hiroshima and Nagasaki,” he told The New York Times in 2015. Had the raid failed, he concluded, London would have ended up “looking like Hiroshima.”

Historians have long debated how close Hitler came to nuclear weapons. A German writer, Rainer Karlsch, claimed in “Hitler’s Bomb” (2005), that German physicists conducted three nuclear tests in 1944 and 1945. But he gave no proof. A more widely accepted view is that Hitler’s program, which predated the Manhattan Project, faltered in midwar because of scientific errors and Norway’s successful saboteurs.
Image 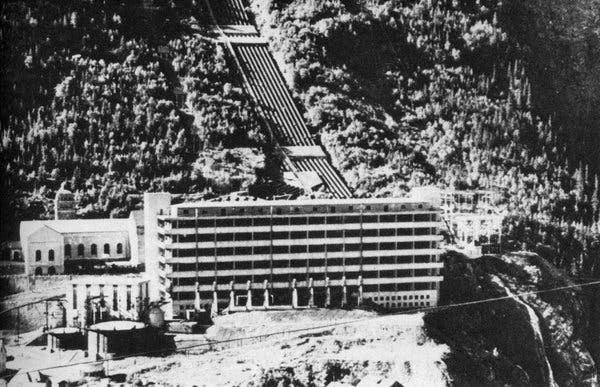 A hydroelectric power plant in the Norwegian town of Rjukan, where German scientists tried to produce the “heavy water” necessary for the manufacture of atomic weaponry. The Germans were experimenting with the process as early as 1940, but the project was sabotaged by commandos led by Mr. Ronneberg.CreditThe New York Times

By 1942, the British knew that Germany had chosen heavy water, or deuterium oxide, to moderate atom-splitting chain reactions to produce bomb-grade plutonium. They knew further that the Norsk Hydro plant in Norway, which had been extracting heavy water since 1934 for making fertilizer, had been taken over by Nazi invaders as the world’s best source of the isotope for Berlin’s atomic weapons program.

A 35-man British commando team had been lost on a 1942 mission to sabotage the plant. Britain then enlisted the Norwegian volunteers under Mr. Ronneberg for Operation Gunnerside, endorsed by Prime Minister Winston Churchill. Air attacks were not ordered for fear of heavy casualties to Norwegian workers and a low probability of success because the heavy water had been distilled in a basement fortified against bombs.

After training in Britain, the group parachuted into Norway. A four-member advance team with a radio and supplies went first, in October 1942. Six others followed in February. They rendezvoused at a cabin 40 miles from the target, at Vemork, on the forested plateau called the Telemark, a national park today.

Blizzards stalled them for a week. Finally, they moved out. One man was designated to break off from the team to maintain radio contact with London. Nine others set off with rations for five days, explosives, fuses, Tommy guns, grenades, compasses and a pair of metal shears that Mr. Ronneberg had picked up at a London hardware store. That final item would prove critical.

They skied by night, rested by day and reached the gorge late on the night of Feb. 27, 1943. Steep slopes plunged 1,000 feet to the Mana River. The power plant was perched on a ledge halfway up the far slope. A guarded suspension bridge over the river led to the front entrance. At the back was a railway line and the German troops’ barracks. Guards patrolled the tracks and a wire fence around the back entrance.

There was no easy way in. “There were so many things that were just luck and chance,” Mr. Ronneberg told The Times. “There was no plan. We were just hoping for the best.” They decided to try the back way.

They waited for hours after midnight, watching the changes of night-shift workers and guards. Then, 75 yards upstream, they climbed down into the windswept gorge, clinging to shrubs and branches to break falls. They crossed the river on an ice bridge, then slogged up the far slope, waist-deep in snowdrifts. They saw guards on the suspension bridge, but the rushing river and the plant’s hum masked their own noises.

Creeping down the railway tracks unseen, they hid behind storage sheds near the perimeter fence. Five remained concealed there, ready to fire on the barracks or the guards, but they were not seen. When a sentry left the fence to make rounds, Mr. Ronneberg and three others dashed to the gate, cut a padlock with the shears and darted into the compound.

They split into two teams. All doors were locked, but Mr. Ronneberg and Fredrik Kayser found a small duct for cables and pipes. Mr. Ronneberg and Mr. Kayser squeezed in, dragging rucksacks of explosives behind them. The duct led to a cavernous hall.

They recognized it as the heavy-water production center: a latticework of iron pipes, rubber tubes, electrical wires and 18 stainless steel cylinders, each 50 inches tall and 10 inches in diameter — the heavy-water containers. There was no guard, only a workman at a desk. They dropped down, and Mr. Kayser put a gun to the man’s chest, urging him to be silent.

Mr. Ronneberg unpacked the rucksacks and began attaching explosives to the storage cylinders and water-distillation apparatus. They were joined by the other two demolition men, who had broken a window to get in. They set fuses on 30-second timers, ignited them with matches and fled.

As they raced past the barracks, they heard the muffled crump of the explosion. Soon sirens began to wail at the plant. But the saboteurs were out of sight by the time Germans scrambled from the barracks and workers scattered in chaos. A hunt by 2,800 soldiers spread over the countryside. But by sunrise, the saboteurs were well away, beginning a 280-mile trek across forests and mountains to neutral Sweden.

The raid — with no shots fired and no saboteurs wounded — had destroyed the cylinders, sending 1,100 pounds of heavy water down a drain, along with the plant’s capacity to make more. It took the Germans four months to rebuild, and more time to restore full production. But in November, the Vemork operation was crippled again by Allied bombers.

Hitler ordered the project moved to Germany, but a Norwegian ferry carrying the equipment and the remaining stocks of heavy water was sunk on route by resistance saboteurs in early 1944. That ended Nazi Germany’s struggle for Norwegian heavy water and all of the regime’s realistic hopes for an atomic bomb.

Mr. Ronneberg led other raids, attacking German supply lines and destroying a railway bridge with plastic explosives. He received Norway’s highest decoration for military gallantry, the War Cross With Sword, from King Haakon VII; the Distinguished Service Order from Britain; the Legion of Honor and Croix de Guerre from France; and the American Medal of Freedom With Silver Palm. (The latter was established by President Harry S. Truman to honor civilians who aided the war effort; it was replaced in 1963 by the Presidential Medal of Freedom.)

Joachim Holmboe Ronneberg was born in Alesund, on Aug. 30, 1919, one of two sons of Alf and Anna Krag Sandberg Ronneberg. Joachim and his brother, Erling, who also became a wartime resistance fighter, attended schools in Alesund, on Norway’s western coast. At 21 he escaped to England. He was a good skier and enlisted in the Kompani Linge, the Norwegian-exile special forces.

Mr. Ronneberg joined the NRK public broadcasting network in Norway in 1948. He became a journalist and program director and retired in 1988.

He married Liv Foldal, a crafts teacher, in 1949, and had three children: Jostein, Asa and Birte. Aside from his daughter Birte, there was no immediate information on his survivors.

Mr. Ronneberg lectured widely for years about Norway’s history and his wartime experiences. While “The Heroes of Telemark” was filmed on location in Norway, he often scoffed at the liberties taken with the facts. “They took a true story and spun their own idea around it,” he told The Daily Telegraph of London in 2010. “It should never have been allowed.”

Interest in the exploits of Mr. Ronneberg and the nine other Norwegians involved in thwarting the Nazi nuclear project surged in Norway in 2015 when NRK, the state broadcaster, ran “The Heavy Water War,” a six-episode mini-series that became a national sensation. A statue of Mr. Ronneberg in front of City Hall in Alesund, where he lived for most of his life, was put up later that year to observe his 95th birthday.

Mr. Ronneberg applauded the television series for introducing younger Norwegians to wartime history that they knew little about, but he expressed annoyance that it had altered the names of the directors of Norsk Hydro, the company that ran the plant that he blew up; they had collaborated with the Nazis.

He told The Times that it was “quite incredible” that their real identities had been concealed and that painful memories of collaboration with the Nazis by Norway’s wartime leader Vidkun Quisling still hampered a clear and full historical reckoning.

“There is a lot of talk about ‘never again,’ but this is impossible if we don’t remember what happened back then,” Mr. Ronneberg said.

During preparations in England for the raid, the saboteurs had been promised a place in history by the mastermind of the operation, Leif Tronstad. “But none of the men were there for history,” Neal Bascomb said in perhaps the most definitive book on the raid, “The Winter Fortress: The Epic Mission to Sabotage Hitler’s Atomic Bomb” (2016).

“If you went to the heart of the question, none of them were there for heavy water, or for London,” Mr. Bascomb wrote. “They had seen their country invaded by the Germans, their friends killed and humiliated, their families starved, their rights curtailed. They were there for Norway, for the freedom of its lands and people from Nazi rule.”

A version of this article appears in print on Oct. 23, 2018, on Page A1 of the New York edition with the headline: Joachim Ronneberg, 99, Saboteur of Nazis, Dies.
nytimes.com