With: 0 Comments
Military council exaggerated threat to justify not signing deal which would concede some authority to civilians, security sources say
By  MEE correspondent

The ruling military council announced on state television that it had foiled an attempted coup on Thursday, hours after it delayed the expected signing of the agreement which was supposed to be finalised almost a week ago.

A Sudanese military source, who could not be named for their own security, told MEE that the coup plot had been “fabricated” to justify not signing the deal. The agreement would have conceded some authority to civilians after protests that began in December and had already overthrown three-decade ruler Omar al-Bashir.

The source said the 12 officers arrested for the coup were not enough in number to have carried out a coup, adding that the notorious Rapid Support Forces paramilitary and military intelligence were specifically on alert to prevent any attempt.

Another security source told MEE that officers still loyal to Bashir were actually considering a coup but that they had not gone beyond the planning stages.

Babikir Faisal, a leading member of the opposition Forces for Freedom and Change, told MEE that Bashir’s allies still have influence in the army and security apparatus and could try to abort the power-sharing agreement.

“The old regime is attempting to obstruct the agreement because it will hit their interests and the establishment of [civilian] institutions through the transitional period will mean accountability and the start of a real war on corruption,” he said.

The military source told MEE that the military council’s generals did not want to finalise the power-sharing deal because of demands for an investigation into the violent dispersal of protesters on 3 June, when more than 100 were killed.

“They are looking for anything that can help them to escape from the implementation of the agreement, especially the part concerning the probe of the killing of civilians,” they said.

The military source speculated that the military council might hope to use the threat of a coup, which could reverse gains made by protesters, to force the opposition into making concessions. 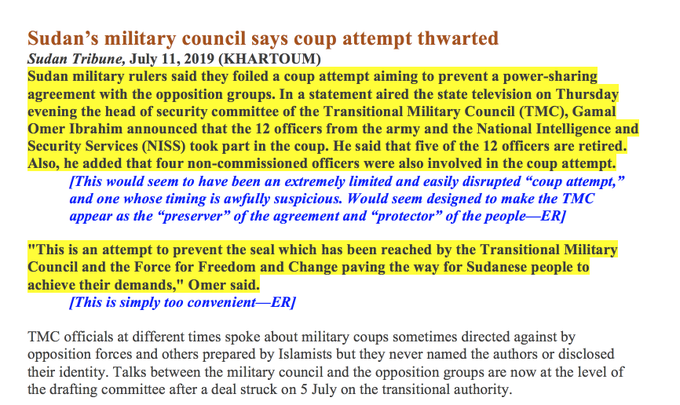 #SudanUprising: Too few details have been provided for us to assess this claimed “coup attempt.” But the timing is simply too suspicious—and as presented, allows the #TMC to appear as the “preserver” of the agreement and “protector” of the people. TMC is defined by its lies.

In June, the military council’s spokesman Shams el-Din Kabbashi said that they had uncovered two other plots – one by Bashir loyalists and the other by the opposition, who denied any attempt.

A security source told MEE at the time that the reported arrest of dozens of military and police captains, accused of being involved in coup plotting, was actually punishment for those captains refusing to use violence against protesters on 3 June.

The military council may be regretting its initial decision to agree to a deal with the opposition which is thought to have been made under international pressure, and may now be looking for ways to back out, Mohammed Badawi, a researcher at the African Center for Justice and Peace, told MEE.

He said the RSF paramilitary and its leader Mohammed Hamdan Dagolo, known as Hemeti, had a lot to lose because of their investments in gold mining.

“[For] the legitimisation of the RSF’s investments and the repositioning of its many interests, the military council needs to gain some time before the beginning of the transitional period,” said Badawi.

“This move by the army [to claim a coup attempt] means it’s paving the way for bigger surprises very soon because the military council actually has hidden links with the former regime.”