The Amazon Rainforest is burning. Here’s why there are so many fires and what it all means for the planet.

businessinsider –  The world’s largest rainforest is ablaze. On Tuesday, a new fire started every minute in Brazil.

Since August 15, more than 9,500 fires have sparked in Brazil, most of them in the Amazon basin. The blazes can be seen from space, and the smoke even temporarily eclipsed the sun in Sao Paulo on Monday.

So far this year, Brazil has recorded more than 76,000 fires— an annual record, according to Brazil’s National Institute for Space Research.

The vast majority of these fires were deliberately started by people: Farmers and loggers purposefully set fire to the rainforest during the summer months to clear swaths of the Amazon for industrial or agricultural use in the coming year. 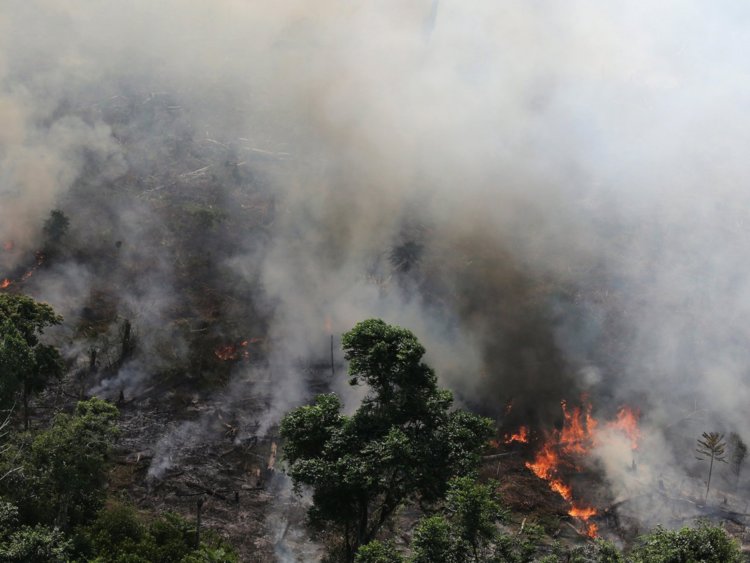 An aerial view of a tract of Amazon jungle burning as it is being cleared by loggers and farmers near the city of Novo Progresso, Brazil, August 23, 2019.Nacho Doce / Reuters

Here’s what’s really going on in the Amazon.

Why is the Amazon burning?

Unlike wildfires in California, or the current blazes in Siberia, the Amazon fires aren’t natural.

About 99% of Amazon fires start from human actions, “either on purpose or by accident,” Alberto Setzer, a senior scientist at Brazil’s National Institute for Space Research (INPE), told CNN.

As CNN meteorologist Haley Brink explained in the network’s report, “[Farmers] wait for the dry season and they start burning and clearing the areas so that their cattle can graze. That’s what we’re suspecting is going on down there.”

The Amazon’s dry season runs from July to October and peaks in late September, and with it comes this annual burning, called the “queimada.” The rest of year, wetter weather minimizes the risk of fires.

“The important thing to know about the Amazon is that few fires occur there naturally,” Mikaela Weisse, who tracks deforestation and fires for the World Resources Institute, told Vice. 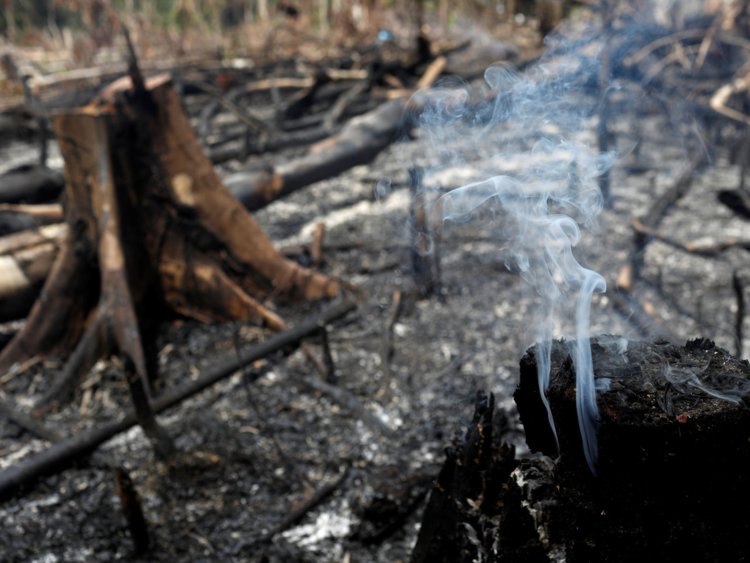 A tract of Amazon jungle burns as it is being cleared by loggers and farmers in Novo Airao, Amazonas state, Brazil August 21, 2019.Bruno Kelly / Reuters

In addition to farmers, illegal loggers and miners sometimes light fires as well, in order to destroy evidence of their activities or drive away indigenous people, Vox reported. At least 400 indigenous tribes live in the rainforest, and their cultures and livelihoods are intimately linked with the state of the Amazon.

If fires are set every summer, why are this year’s a big deal?

What’s unprecedented this summer is how many individual fires were sparked at the same time. In 2019, Brazil has recorded more fires than in any other year since researchers began keeping track in 2013 — and there are still four months to go.

This surge of fires in Brazil mark an 83% increase from the same time period last year, Brazil’s National Institute for Space Research reported. All told, Brazil only had about 40,000 fires in 2018, about half of this year’s current total of 76,000.

These fires also come on the heels of another worrisome milestone for the world’s largest rainforest. The month of July set a new record for the most deforestation ever in the Amazon in a single month,The Guardian reported. The Amazon shrunk by 519 square miles (1,345 square kilometers). That’s more than twice the area of Tokyo.

Data from Brazilian satellites indicated that about three football fields’ worth of Amazonian trees fell every minute last month. The total deforested area in July was up 39% from the same month last year.

Deforestation and fires are linked, since setting blazes is one of the main ways people clear land in the Amazon. 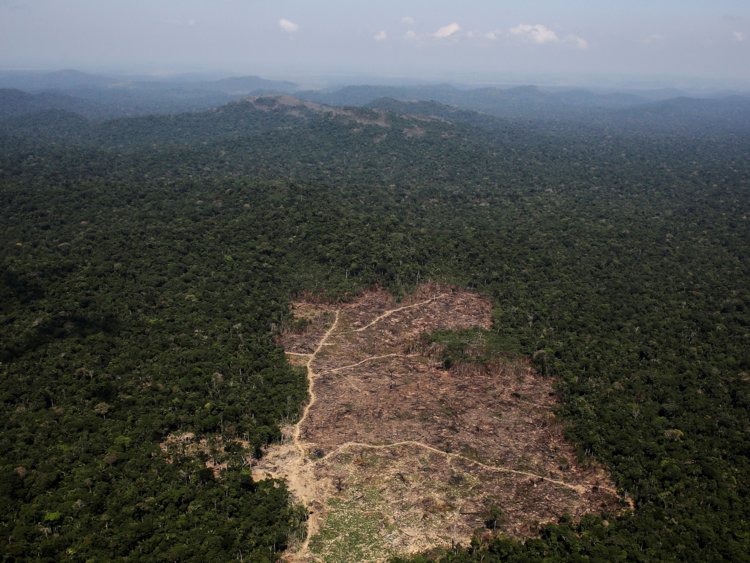 An aerial view of a tract of Amazon jungle recently cleared by loggers and farmers near the city of Novo Progresso, Brazil on September 22, 2013. Nacho Doce/Reuters

Experts and environmentalists say this high deforestation rate can be linked to the policies and rhetoric of Brazil’s president, Jair Bolsonaro.

Bolsonaro has indicated that protecting the Amazon is not one of his top priorities. He supports development projects like a highway and hydroelectric dam in the Amazon.

His administration has cut down on the seizing of illegally harvested timber. In 2018 (under the previous administration), 883,000 cubic feet of illegal timber was seized. As of May 15, Bolsonaro’s government agencies had seized only 1,410 cubic feet, Pacific Standard reported. 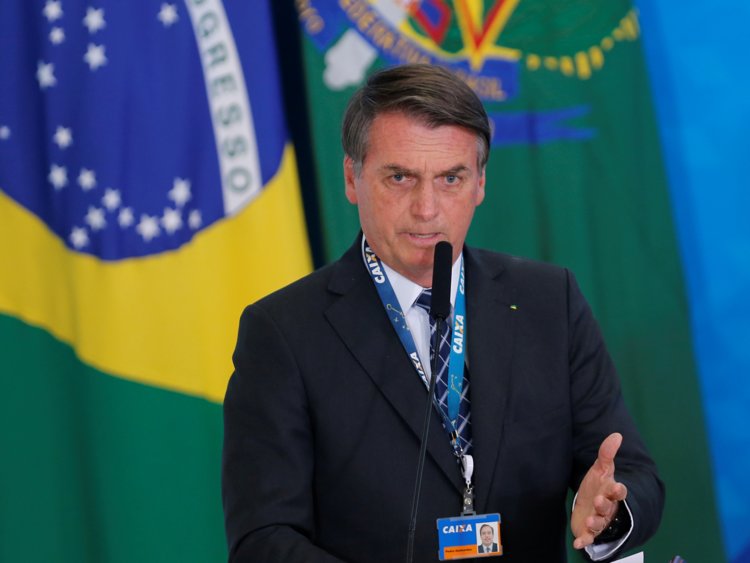 What’s more, between January and May, Bolsonaro’s government lowered the number of fines it levied for illegal deforestation and mining (down 34% from the same period in 2018) and decreased its monitoring of illegal activity in the rainforest.

Do the fires have to do with climate change?

Individual events like forest fires, hurricanes, and winter storms can’t be directly linked to climate change; however, climate change does increase the likelihood and frequency of wildfires around the world. Warmer conditions also allow blazes do start to grow bigger than they otherwise might have.

The Amazon’s humidity usually stifles these fires before they get too big, but this year was particularly hot and dry worldwide. 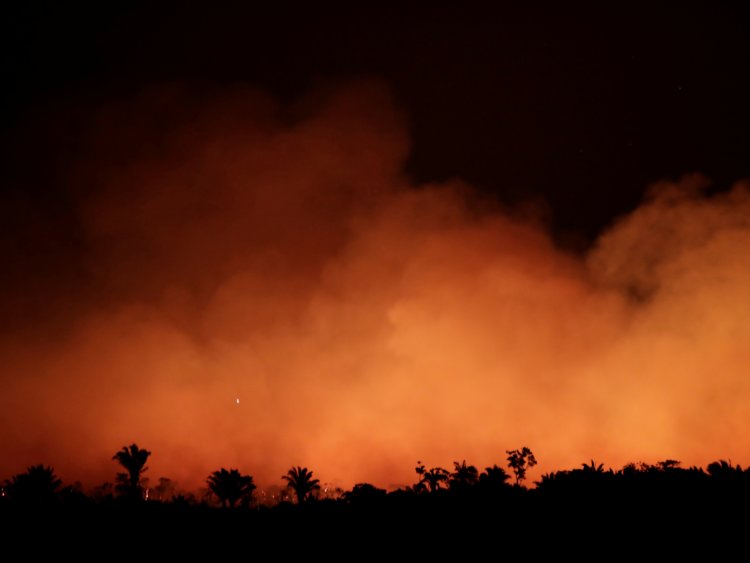 Smoke billows during a fire in an area of the Amazon rainforest near Humaita, Amazonas State, Brazil on August 17, 2019. Ueslei Marcelino/Reuters

Overall, this year is on pace to be the third hottest on record globally, according to Climate Central. Last year was the fourth warmest, behind 2016 (the warmest), 2015, and 2017.

Hotter air sucks away the moisture from trees and soil, while decreased rainfall makes for parched forests that are more prone to burning. In that sense, climate change and uncontrolled rainforest blazes are interconnected.

How will this affect the planet?

As the world’s largest rainforest, the Amazon plays a crucial role in keeping our planet’s carbon-dioxide levels in check. Plants and trees take in carbon dioxide and release oxygen back into the air in their process of photosynthesis. This is why the Amazon, which covers 2.1 million square miles, is often referred to as the “lungs of the planet”: The forest produces between 6% and 20% of the oxygen in our planet’s atmosphere. 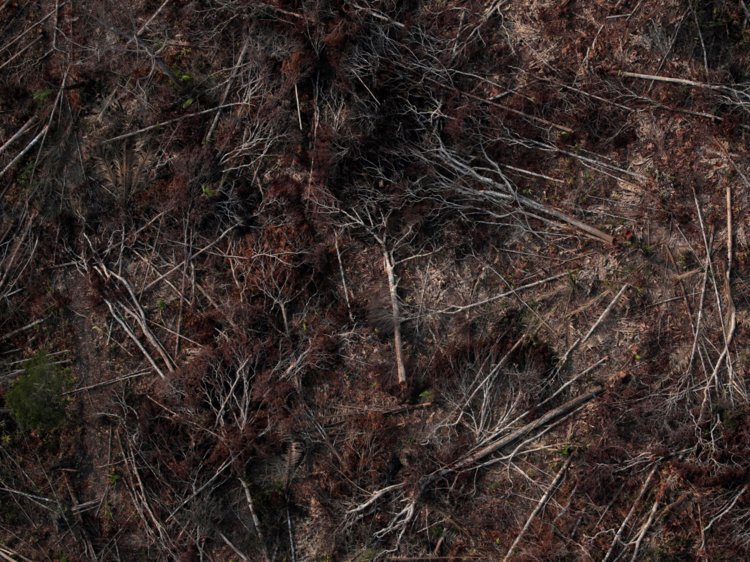 An aerial view of a deforested plot of the Amazon near Porto Velho, Rondonia State, Brazil August 22, 2019. Ueslei Marcelino/Reuters

But when trees burn, they release carbon dioxide back into the atmosphere, where it contributes to climate change.

Scientists also fear that over time, the Amazon could suffer so much deforestation that a feedback loop could turn it into an African-savanna-type landscape. If another 20% of the Amazon were to disappear — roughly 20% of the Amazon has already been cut down in Brazil in the past 50 years, according to the Intercept— some experts think that could trigger a process called a dieback, in which the rest of the forest dries out and burns.

If that happens, up to 140 billion tons of stored carbon could get released into the atmosphere, which would cause a further uptick in already rising global temperatures.

“The Amazon is incredibly important for our future, for our ability to stave off the worst of climate change,” Christian Poirier, the program director of non-profit organization Amazon Watch, told CNN. “This isn’t hyperbole. We’re looking at untold destruction — not just of the Amazon but for our entire planet.”

0Shares
0
2019-08-24
Previous Post: China, South Sudan signs cooperation agreement
Next Post: Iraqis renew call for US troops to get out