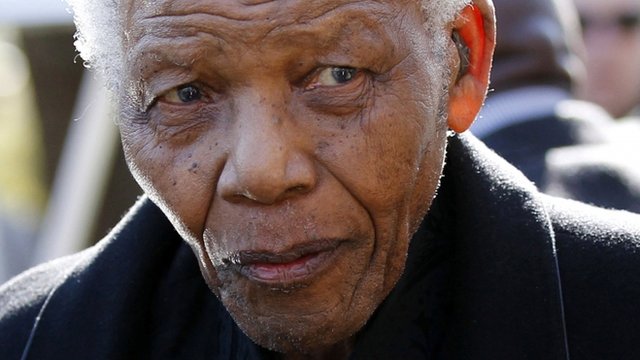 Karen Allen: “There is a sense of deep sadness in South Africa today”

South Africans are heading to work in a sombre mood as they await news on former President Nelson Mandela.

The South African presidency announced on Sunday evening that Mr Mandela had become critical, even though doctors were “doing everything possible”.

A senior official said South Africans should not hold out “false hopes”.

South Africa’s first black president, 94, was taken to hospital in Pretoria earlier this month for the third time this year, with a lung infection.

President Jacob Zuma said on Sunday that he had visited Mr Mandela and spoken to his wife and medical teams.

Mr Zuma said he had been told by doctors that the former president’s condition had worsened over the past 24 hours.

“The doctors are doing everything possible to get his condition to improve and are ensuring that Madiba is well-looked after and is comfortable. He is in good hands,” said President Zuma, using Mr Mandela’s clan name by which he is widely known in South Africa.

Mac Maharaj, Mr Zuma’s spokesman, told the BBC’s Newshour that the doctors’ use of the word “critical” was “sufficient explanation that should raise concern amongst us”.

“Therefore we want to assure the public that the doctors are working away to try and get his condition to improve,” he said.

Mr Maharaj added that this was a stressful time for the Mandela family, and appealed for their privacy.

“I think there is need to be sombre about the news. There is a need not to hold out false hopes but at the same time let’s keep him in our thoughts and let’s will him more strength,” he said.

The ANC – the party of Mr Mandela and Mr Zuma – said it “noted with concern” the latest reports, and that it joined the president in calling “for us all to keep Madiba, his family and medical team in our thoughts and prayers during this trying time”.

The BBC’s Karen Allen reports from outside the Pretoria hospital that the mood in the country is sombre.

Reality is sinking in, says our correspondent. This, however, is uncharted waters and analysts say it is not clear how South Africans will react.

It is not known what kind of condition precipitated the deterioration, she says.

There has been little information about his condition in recent days. On 13 June Mr Zuma said Mr Mandela’s health continued to improve but that his condition remained serious.

Mr Mandela is revered for leading the fight against white minority rule in South Africa and then preaching reconciliation despite being imprisoned for 27 years. He left power after five years as president.

The former president and Nobel Peace Prize winner is believed to have suffered damage to his lungs while working in a prison quarry.

He contracted tuberculosis in the 1980s while being held in jail on the windswept Robben Island.

Mr Mandela retired from public life in 2004 and has rarely been seen at official events since.

On Saturday, it emerged that the ambulance in which Mr Mandela was taken to hospital on 8 June broke down, meaning he had to be moved to another vehicle.

But Mr Zuma said he had been assured that “all care was taken to ensure his medical condition was not compromised”.

“There were seven doctors in the convoy who were in full control of the situation throughout the period. He had expert medical care,” he said.

Are you keeping a vigil for Nelson Mandela? Are you outside the hospital? Send us your experiences using the form below.