It was the chant Arsenal’s supporters used as a signal of their superiority – a song designed to demoralise opponents in the years when silverware was a common currency.

“One-nil to The Arsenal” carried an ominous tone when the teams managed by George Graham and Arsene Wenger were at the height of their powers and the titles rolled in for the Gunners.

It was turned back on Arsenal in mocking tones by Manchester City’s supporters at the Etihad Stadium on Sunday as for the second time in a week that once-famous advantage was transformed into a damaging defeat.

Arsenal have led by that single goal at Everton and Manchester City before losing 2-1, overpowered and outflanked in both games in a manner that had alarm bells ringing for those who saw familiar flaws being exposed.

So has this last week proved that the early season optimism was only another false dawn for Arsenal and Wenger, or is this simply a stumble?

Same old Arsenal?
Offside decisions difficult to accept – Wenger
Arsenal’s weakness under pressure, first at a thunderous Goodison Park on Tuesday and again in the face of a Manchester City side that was simply too intense and talented for them to resist, was something that was supposed to have been cured this season.

And, in Arsenal’s defence, there had been promising signs that the obvious soft underbelly that has undermined them in recent seasons had been cured at times this term.

Arsenal were poor at Manchester United on 19 November but hung in and earned a point they did not merit when Olivier Giroud equalised late on. It was the sort of the game they had lost on many other occasions.

And it was only a fortnight ago that Arsenal were being lauded for a stylish, ruthless demolition of West Ham United at the London Stadium, a performance many felt carried the hallmark of potential champions.

The loss at Everton was their first in the Premier League this season since the opening day defeat at home to Liverpool, and in that spell was a 3-0 beating of current leaders Chelsea that was so comprehensive that it convinced Antonio Conte he had to reshape tactically, with staggeringly successful results and 11 straight league wins.

It was an impressive 14-game sequence for Arsenal.

In mitigating circumstances, they have also lost Shkodran Mustafi to a hamstring injury. The Germany central defender has proved an excellent signing since arriving from Valencia in the summer, adding genuine defensive backbone in partnership with Laurent Koscielny.

And yet. And yet.

The question Arsenal have failed to answer on so many occasions since “The Invincibles” went 38 games unbeaten to win their last title in 2003-04 is – could they stand it when the heat was on, when the physical and mental pressures were at their height?

At Everton and Manchester City they looked in control at half-time, less so at the Etihad perhaps, and twice they have become unsettled and eventually beaten by teams who have applied sustained pressure.

When it came to the pressure points, Arsenal were brittle and cracked. They have been fragile before and now need to produce hard evidence very swiftly that this is merely a temporary state of affairs and not a revisiting of damaging old habits that refuse to die.

Arsenal looked tired. They were subjected to a fierce physical test at Everton on Tuesday, but every other title contender has been playing this week and they quite simply have to meet these demands if they wish to end that title drought, irrespective of the fact they have Champions League football to factor in where the likes of Chelsea and Liverpool have no European commitments.

Once Manchester City went ahead there was, from an Arsenal perspective, a grim inevitability about the outcome. And, most worryingly of all for Wenger, it seemed like mentally his players knew it.

This talented team has been betrayed by its Jekyll and Hyde nature under Wenger for years and these last two games will have raised all the old questions and doubts.

In the 12 seasons since Arsenal last won the title, in only two of those campaigns has the margin between the Gunners and the champions been in single figures. Twice the gap has been more than 20 points – so a systematic pattern has emerged rather than an extended hard luck story.

The gap to Chelsea is already nine points. Arsenal now have home games coming up against West Bromwich Albion and Crystal Palace. They cannot allow it to get any wider.

Where was Mesut Ozil?

Mesut Ozil’s performances have come under the spotlight this week. Mesut Ozil is a graceful creator. He can make and score goals and influence games – but when Arsenal needed him as the chips were down at Everton and Manchester City, he went missing.

At Goodison Park, he carelessly squandered a potentially decisive chance when the score was 1-1, and when Ashley Williams powered in to head Everton’s late winner, Ozil was heavily criticised for turning away from the challenge, appearing to flinch as the defender charged in.

And at Manchester City, when Arsenal were struggling to gain any foothold and their defence was being placed under constant examination, Ozil’s presence could best be described as peripheral. He was on the margins rather than a vital outlet.

Ozil is used by Arsenal’s critics, with justification, as the embodiment of the problems that always let them down. He flourishes when the sun is shining but takes shelter when it starts to rain.

As Kevin de Bruyne stepped forward to take the responsibility vacated by the suspended Sergio Aguero, Ozil failed to fill in as Arsenal’s other stellar performer, Alexis Sanchez, tired visibly and was starved of service in the second half.

Ozil won only 25% of his personal duels against City, lost the ball 14 times and played just one key pass, where that is rated as a pass that assists an attempt on goal.

The final straw of Arsenal’s frustration was a last-minute free-kick mix-up between Ozil and keeper Petr Cech that saw a short ball played rather than the obvious launch into the penalty area.

With that he was gone, down the tunnel and with nothing to strengthen his hand in current lucrative contract negotiations with Arsenal. The serious clubs will look at his performances this week and question whether he has got it in his locker to add to their elite resources.

Ozil has a rare talent that cannot be denied. But on these occasions, like Arsenal, it is also flawed.

Everton manager Ronald Koeman did not spare Wenger’s feelings after he complained that referee Mark Clattenburg’s performance played a part in their loss at Goodison Park.

He was particularly annoyed by a marginal decision on the corner which led to Everton’s winning goal.

Koeman, whose Southampton team beat Arsenal 4-0 at St Mary’s last season, said: “I am not surprised by Wenger and his comments. It is the third home game in a row that I have won against Arsenal and three times it was about the referee.”

It was the same story at the Etihad Stadium as he turned his ire on referee Martin Atkinson and his officials as Leroy Sane looked barely an inch offside for City’s equaliser and Wenger complained David Silva was offside in front of Cech for Raheem Sterling’s winner, although it is questionable whether he was hindering the keeper.

Wenger said: “It is very difficult to accept in a game of that stature but, as it is well known, the referees are protected very well like lions in the zoo, so we have to live with those decisions.”

Wenger’s complaints may be valid, but history suggests it is rather more than errors by officialdom that have been behind their succession of failures to mount a title challenge.

In Wenger’s defence, it is only two defeats and the season has only reached December – the problem is that that table will now tell him and Arsenal they will need something akin to a four-game swing to pass, for one, Chelsea while they go on an extended run of success.

After this week, and the manner of Arsenal’s defeats, it is an equation that would test even Wenger’s endless optimism to the limit. http://www.bbc.com/sport/football/38359736 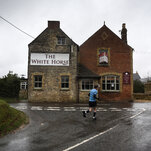