From uneven development to authoritarian government, the morass of issues facing the city of Gondar offer a snapshot of Ethiopia’s wider problems

In Gondar, a city in Ethiopia’s northern highlands, a lone tourist pauses to take a photo of a fortress built more than two centuries ago. Nearby, past a row of gift shops, lies the wreck of a coach torched during unrest in August.

Gondar, known as “Africa’s Camelot”, was once the centre of the Ethiopian empire – at a time when that empire was defined mainly by Amhara traditions.
Today, the city is facing new tensions that have a complex history. A territorial dispute between elites here in the Amhara region and those in neighbouring Tigray has been simmering for at least 25 years.

Tigrayans have been accused by opponents of wielding undue influence over Ethiopia’s government and security agencies since 1991. In recent months, these and other grievances have led to protests, strikes, vandalism and killings in Gondar, causing a drastic reduction in foreign visitors to the tourism-dependent city and an exodus of fearful Tigrayans.

Shops and schools have reopened in Gondar, after the authorities reasserted control in urban areas by declaring a state of emergency on 8 October. But sporadic clashes with the military continue in the countryside.
“We don’t feel like it is our country. We feel like it is the time when the Italians invaded. We are like second-class citizens,” says a prosperous local businessman. Like all interviewees, he requested anonymity due to fear of reprisals from the authorities. Europeans never colonised Ethiopia, but Mussolini’s army occupied the country from 1936 to 1941.

Gondar’s predicament is a microcosm of Ethiopia’s: a toxic brew of uneven development, polarised debate amid a virtual media vacuum, contested history, ethnic tensions, a fragmented opposition and an authoritarian government. Ethiopia’s rulers show few signs of being able to solve the morass of problems, which many believe the government itself caused.

Trouble began in Gondar in July, when word went around that the authorities intended to arrest Col Demeke Zewdu, a former rebel and retired military officer.When security forces tried to arrest Zewdu, who is a member of a committee campaigning over the contested Wolkait territory, armed Amharas protected him and several people, including security officers, were killed.

Wolkait is an administrative district in Tigray that borders Amhara. The committee says Wolkait and others areas were taken out of Gondar’s control by the Tigrayan People’s Liberation Front in 1992, when Ethiopia was divided into a federation along ethno-linguistic lines. Allied rebels led by the TPLF, who unseated a military regime in 1991, introduced the system and still monopolise power.

Critics of the committee point out that a 1994 census found more than 96% of the people of Wolkait were Tigrayan , and that the complaints of annexation stem from the town of Gondar, not the district itself. The activists say the TPLF moved Tigrayans into the area during the rebellion.

The issue struck a chord in Gondar. After Demeke’s arrest, rural militiamen paraded through the city on 31 July, firing bullets into the air during a large, peaceful demonstration. It is thought that the demonstration was facilitated by the Amhara wing of the TPLF-founded Ethiopian People’s Revolutionary Democratic Front (EPRDF) – a four-party coalition that, along with allied organisations, controls all the country’s legislative seats.

A Tigrayan lecturer at Gondar University said he abhors Ethiopia’s ethnicised politics and believes jostling between the Amhara and Tigrayan EPRDF wings lay behind the Gondar violence. The TPLF is the predominant party in the EPRDF, and Amhara National Democratic Movement politicians are seeking greater power, he said. “I don’t believe in parties which are organised on ethnicity. I prefer it to be based on the individual.” An end to ethnic politics would make a resolution of the Wolkait issue possible, he believes.

Among activists from Amhara, disavowal of the ethnicity-based system is at the crux of disagreements over how to oppose the EPRDF. Because federalism formally protects the rights of communities marginalised during previous eras, when Ethiopia was a unitary state, promoting national unity at the expense of ethnic autonomy is often cast as regressive.

Groups promoting Amhara identity within a democratised federation are therefore at odds with those focused on national cohesion, according to Wondwesen Tafesse, a commentator on Amhara issues. “Since most diaspora Amharas support Ethiopianist political parties, they seem to have this fear in the back of their mind that a resurgent Amhara nationalism, and the possible emergence of a strong Amhara political organisation, might undermine their political designs,” said Wondwesen.

In the weeks after Demeke’s detainment, there was more unrest, amid allegations that Tigrayan businesses were being targeted and Tigrayans attacked. People in Gondar say the companies were targeted because of their connections with the regime, rather than the owners’ ethnicity. 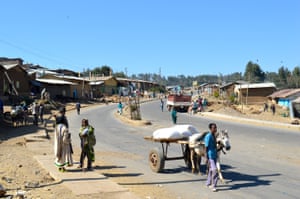 image- Amba Giorgis town in the North Gondar district of Ethiopia’s Amhara region. A territorial dispute has recently caused clashes between farmers and the military

Unrest in Amhara was preceded by protests by the Oromo, Ethiopia’s largest ethnic group, who also complain of marginalisation and repression. In response, the government has reshuffled officials – and intensified repression. During the state of emergency, the government has sent at least 24,000 people to camps for indoctrination under rules that allow the suspension of due process. According to the Association for Human Rights in Ethiopia, security forces killed some 600 demonstrators over the past year.

Since the beginning of November, a new federal cabinet has been announced and similar changes made in the Amhara government. But while maladministration and corruption were tagged as the pre-eminent problems, there is little evidence of officials being punished, or of policy reforms. An Amhara government spokesman said systemic changes were not required.

In August, on the outskirts of Gondar near Demeke’s neighbourhood, a crowd looted Baher Selam hotel. It was targeted following a rumour that the Tigrayan security officers allegedly involved in the operation to arrest the colonel were staying there.

Near the wrecked hotel, an elderly lady was roasting coffee beans. On the morning of the incident she was coming home from church when she heard gunshots.Business has since declined and large numbers of unemployed young people have been mobilised against the government, she said.

People here believe Wolkait was part of Gondar throughout history. “If they take that place, where else are they going to take?” the woman asked. “The situation is not going to go back to normal. If you light a match, it’s small – but it can burn a whole area.”