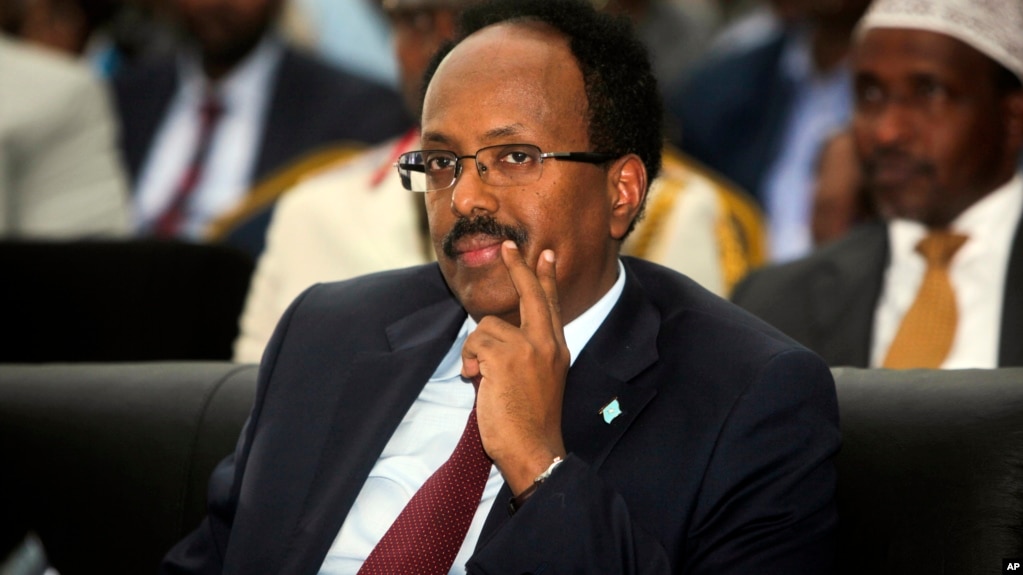 MOGADISHU —  Somalia’s new president was formally inaugurated Wednesday, in a ceremony where he pledged to begin stabilizing the war-ravaged country but warned the task will take many years.Mohamed Abdullahi Mohamed, better known as “Farmajo,” took the oath of office in Mogadishu, watched by three regional heads of state and dozens of diplomats, including U.S. ambassador to Somalia Stephen Schwartz.

Farmajo asked Somalis to help him restore order to a country that has endured decades of internal conflict fueled by clan rivalries and Islamic militancy, and made worse by recurring drought.

“Please, help me to address the most essential and major issues, including security, drought, the rule of law, the implementation of justice and reconciliation, which I think my government can address within the next four years,” he said.

Soon after he spoke, Britain pledged a $125 million aid package that will provide emergency food for up to one million people in Somalia.

President Farmajo promised a special crackdown on corruption, after a presidential election in which candidates allegedly paid out millions of dollars to parliament members in an effort to win their votes.

“I will return the lost confidence between the government and the people, and I promise for the Somalis and the world that my government will change the perception that Somalia is a corrupt nation,” the new president said.

Wednesday’s ceremony, like the election, was held on the grounds of Mogadishu’s international airport, which is guarded by African Union soldiers.

But unlike the election, the inauguration involved Somali artists, singers and musicians, who expressed their hopes for peace.

Farmajo was the surprise winner of the February 3 election, in which he defeated predecessor Hassan Sheikh Mohamud, former president Shiekh Sharif Ahmed and some 20 other candidates.

He rides into office on a wave of public support because of his record during an eight-month stint as prime minister in 2010 and 2011. The government gained ground against militant group al-Shabab during that time, and soldiers were paid regularly.

He promised more of the same during his inaugural speech.

“My government will work on building a strong national army which will have regular payment, equipment and all the necessary mechanism to operate for the national security interest,” he said.

Leaders and diplomats who spoke promised to support his initiatives. Djibouti’s President Ismaïl Omar Guelleh called for Somalis to work with the new president.

“We would like to see Somalia being friendly and peaceful among its people, with the region and the world,” he said. “And I call for the president to understand the message from the Somalis who supported his election and the international community, and I call for the Somalis that they do not only have a high expectation from the president but to help him achieve and pass the hurdles ahead.”

Related stories   Indeed why? WHY IS AMERICA BULLYING US ?
Powered by Inline Related Posts

“Kenya remains committed to the regional security of the region and to collaborate with Somalia to defeat its enemy, the terrorists, which is also our common enemy,” said Kenyatta. “We are asking the international community to support the new government of Somalia because Somalia’s security and development is vital for the security of the entire region and the whole world.”

“The presence here today of all the leaders of Somalia’s neighboring countries, and the presence of many of his predecessors and his rivals for the presidency …I take as a very positive sign of the goodwill towards Somalia and towards the new president.”

“We know the expectations are high for the new president and we all need to work together to meet them,” Schwartz said,

The inauguration comes as al-Shabab continues to launch attacks on government and AU targets around the country.

During Wednesday’s inauguration, held at a venue inside Mogadishu’s airport, traffic was banned on the city’s major roads and intersections and all commercial flights to and from the capital were suspended to prevent possible attacks.

More than 20,000 African Union troops are stationed in Somalia to prevent al-Shabab from overthrowing the government.

Somalia has not had an effective central government since the fall of dictator Mohamed Siad Barre in 1991.