(CNN)The death toll has risen to 113, after several days of searching turned up more bodies following a weekend landslide at a massive landfill outside Ethiopia’s capital, Addis Ababa.

Communications Minister Negeri Lencho told CNN Wednesday the bodies of 38 males and 75 females had been recovered, many of them children.
“This is the result of the search because this is a vast area. It is also deep. The amount (that) collapsed, it is deep, it takes time,” the minister said, explaining the sharp increase in the death toll.
Police officers secure the scene after the landslide at the landfill, as excavators aid rescue efforts on the outskirts of Addis Ababa on Sunday, March 12, 2017.
At least 60 people were counted dead shortly after the mounds of decaying trash and debris gave way late Saturday. Many people lived in makeshift houses on top of the garbage.
“There is no explanation for this accident except naturally the pile of this trash may have been shaken. The investigation … is still going on,” Lencho said. 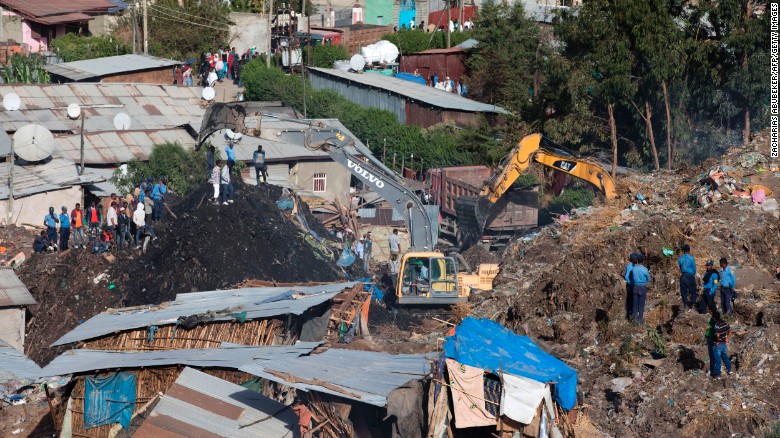 The landfill is called Koshe, which means “dust.” It’s been around for decades, servicing the sprawling and growing capital.
“It’s a sad story because the government has been trying to resettle the people residing in the area,” Lencho told CNN Monday. The government had also been building a factory to convert waste products at the landfill into energy, he said.
Fisseha Tekle, the chief researcher for Amnesty International in Ethiopia, said the government claims it has been developing for the last decade, “but it was not able to take residents out of this deplorable situation,” he said.
And, he said, there had been no concrete action to remove the people from this area prior to this incident.
The smells permeate the landfill and nearby areas. Small fires erupt because of the methane gas the decomposing trash produces.
“And those people are living in the middle of that location. It’s not a landfill anymore, it’s like a mountain,” Tekle said. “Whatever kind of country you are, you cannot let people live in this situation.”
Tekle said the government should resettle the people and do an “accountability investigation.”
The government is “fully responsible for the people living on this site and for their condition of those people who died, and for their lack of safety,” he said.
*****
Along with the dead, dozens were injured in the landslide, Lencho said. Video showed crews with heavy equipment at the scene scraping and digging through the debris and shots of flimsy and upended dwellings.
The government has transferred 290 people who were living on the landfill, but who were not injured in the accident, to a temporary shelter in a youth center in Addis Ababa
***
Hope for Korah

UPDATE: please continue to pray as morning has broken in Korah and many are grieving and frantically still looking for friends and family. Digging continued through the night as people who were trapped were calling on cell phones. We have been told many have died and hundreds are buried. One of our HFK families was rescued after she and her 3 children scrambled to the top as their home was sliding. Many others living in that area were not so fortunate. One of our children fro…

Hope for Korah, a Canadian NGO that assists people living in the area near the dump, said on its Facebook page in the days after the landslide that people at the landfill were “frantically looking for friends and family.”
Some of the people who were trapped tried to call authorities to get help from inside the debris, the group said.
One woman and her three children managed to scramble to safety just as their home became caught up in the landslide, according to the NGO.
CNN
Related stories   Some 20 TPLF Suspects Including Top Leader Sebhat Nega Appear in Court
Powered by Inline Related Posts
2017-03-16
Previous Post: “ለነጻዋ ኦሮምያ ብቸኛው አማራጭ የተባበረች ኦሮምያ – በኢትዮጵያ ፋንታ”Alternative to Independent Oromia is Union Oromia
Next Post: Ethiopia’s GERD dam will make Egypt’s Nile delta sink under the Med, study says