Keitany, 35, crossed the finish line on The Mall in two hours 17 minutes one second, the second-fastest time in history.

That was 41 seconds quicker than four-time British Olympian Radcliffe ran in winning the event in 2005.

Keitany, 35, crossed the finish line on The Mall in two hours 17 minutes one second, the second-fastest time in history.

That was 41 seconds quicker than four-time British Olympian Radcliffe ran in winning the event in 2005. 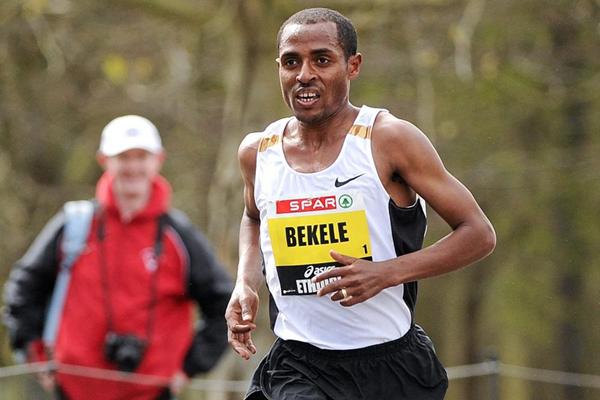 Bekele – the 5,000m and 10,000m world record holder – looked to be mounting a challenge in the final stages, but Wanjiru found enough pace to finish strongly and eventually win by nine seconds.

Tirunesh Dibaba of Ethiopia was the runner-up in the women’s race, clocking a time of 2:17:56.

Speaking to the BBC after the race, Keitany said: “It was a great day for me. It was really amazing, to run the best time.

“The weather was good at the beginning, it was nice for me and my pace. I’ve run my best.”

Wanjiru said he felt comfortable running at world-record pace for sections of the race and is still aiming to break Dennis Kimetto’s time of 2:02:57, set in Berlin in 2014.

“In the beginning the race was very fast and we were inside world record pace. It was the pace I was preparing for,” he told BBC TV.

“We tried to maintain that pace for half of the race. From there it was becoming tougher and tougher. The sun was coming and the day was beautiful – but we don’t need too much sun!”

In the women’s race, Britain’s Alyson Dixon finished 12th in a personal best of 2:29:06 to secure her place at this summer’s World Championships.

However, Jo Pavey, who needed to finish as one of the top two British women to qualify for August’s championships in London, was forced to retire after about 17 miles.

There was a shock among the British men, as a club runner who did not start with the elite athletes clocked the fastest time of the day and secured qualification for the World Championships in August.

Of the established names, Robbie Simpson was the fastest, finishing in 2:15:04, followed by Andrew Davies seven seconds later.

But both were upstaged by Josh Griffiths, a club runner from south Wales who began on the Championship start and crossed the line ahead of both of them in 2:14:49.