Fresh tension in a disputed area has reopened old wounds between the Oromia and Somali states, as ethnic federalism fails to contain violence

Three different flags flutter in the breeze along the road that runs through Moyale in southern Ethiopia. The first is green, yellow and red: the colours of the Ethiopian federal state. Then, on the side of the road: red, black and white, with a tree in the centre, the colours of the Oromo. And a third: the green, white and red, with a camel in one corner, of Somali state.

Moyale, deep in Ethiopia’s dusty south-eastern drylands and straddling the border with Kenya, is split sharply down the middle. The fresh tarmac of the road that divides it marks the long-contested frontier between Oromia and Somali regional states.

These flags fly side-by-side in Moyale as a testament to the success of Ethiopia’s distinct model of ethnically based federalism, established in 1994.

But it is also a measure of its failings: Moyale has two separate administrations; segregated schools; parallel court systems; rivalrous police forces, and adversarial local militia. More than 20 years after ethnic federalism was introduced, tensions between the two sides – Borana Oromo and Garri Somalis – are as fraught as ever.

“There is a serious problem emerging,” said Ibrahim, an elderly Somali man in the courtyard of a hotel on the Oromo side of the road. As a clan elder, he has freedom to sit in places that younger Garri men would avoid, he said. Ill feeling between the two communities stretches back decades, but recent events have reopened old wounds.

A clash between two armed groups near Moyale in April resulted in tit-for-tat killings, with at least one Garri and one Borana reported dead (both groups claim more), and injuries on either side. Locals reported similar deadly flare-ups early this year.

Yet violence in Moyale has remained fairly contained, in part due to the town’s bloody recent past. In 2012, fighting over land between the pastoralists in the surrounding area led to 18 deaths and forced tens of thousands of Moyale’s residents to flee across the border into Kenya.

Memory of this has helped to maintain the peace since, and a community accord struck between clan elders has kept the younger generation in check. But with the latest outbreak of what he calls “revenge killings”, Ibrahim said he was worried that the accord could be broken.

Ethnic tensions here are part of a wider confrontation that stretches all along the border from Moyale in the south to Dire Dawa, some 1,000km (620 miles) north. Ethiopia’s government, the Ethiopian People’s Revolutionary Democratic Front (EPRDF), imposed a state-of-emergency in October following widespread protests against the regime in Addis Ababa, the capital, which resulted in at least 669 deaths. 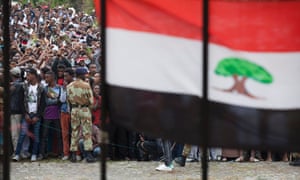 Members of the Oromo community gather in Bishoftu, Oromia, in October 2016, as a series of protests erupted in the capital, Addis Ababa. Photograph: Zacharias Abubeker/AFP/Getty Images

But while stability returned to the rest of the country in the following months, the Somali-Oromo regional border saw an outburst of violence on a scale that many said was unprecedented. According to residents in Oromo districts along there, violent incursions by Somali militia began in December and continued sporadically over the next three months. Human Rights Watch, which received reports of dozens of casualties, said these clashes were of a different order to the pastoralist struggles over water points and farmland that have long afflicted the region in times of drought.

Instead, the clashes involved heavily armed men on both sides in locations all along the border. Schools were looted and civil servants shot in their offices, said Fekadu Adugna, an academic at Addis Ababa University, who specialises in Oromo-Somali relations.

Related stories   Why Egypt's and Sudan's "Fears" Over GERD Are Exaggerated!
Powered by Inline Related Posts

Residents on the Oromo side also reported widespread rapes and said they had found ID cards belonging to members of the controversial Somali special police, know as the “Liyu”, among the remains of the dead. The worst of the violence took place in the area around Negele, another frontier town about 500km from Moyale.

There has been no official investigation into the events and there are no exact figures for the numbers killed. According to Ibrahim Adam, a conflict-resolution field officer for Igad, an east African regional bloc, more than 100 people died and thousands were displaced in February and March in the Negele area alone. Oromo activists have claimed much higher numbers.

Few now dare take the road from Moyale to Negele, which runs through both Garri and Borona districts. Residents of Moyale claim that young men at roadblocks have been threatening travellers from a different ethnic group.

An indication of the scale of the conflict came in March when the prime minister, Hailemariam Desalegn, referred to it in a speech to parliament. For the first time, it was framed not as a dispute over resources but as a battle between two regional militias and police forces. “The problems have no relation to ethnic conflicts,” Desalegn said. “It is our lower political leadership that commands these actions.”

This surprisingly candid explanation tallies with those given by Moyale residents, who see the conflict as one waged by local officials with expansionist agendas. Both regional governments have claimed contested territories in the past couple of years. “This is no longer just between two communities but between two governments,” said Fugicha, a Borana. “It serves their interests.” 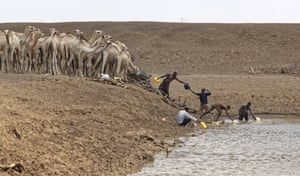 Camel herders collect water for their animals at one of the few watering holes left in the drought-affected region near Moyale on the Ethiopian border. Photograph: Ben Curtis/AP

Last month, the federal government stepped in to administer a peace agreement between the two sides. It promises to enforce the border that was demarcated following a referendum in 2004, and settle the status of Moyale, which was excluded from that referendum because its ethnic politics were deemed too complex.

Moyale’s Oromo, in particular, have expressed concern about the outcome of the peace agreement. Rumours of a second referendum, and Somali encroachment in a town regarded as historically Oromo, were behind last month’s revenge killings, they said.

Somalis, on the other hand, have pointed to the assertiveness of the new Oromo regional government that came to power in the wake of last year’s protests. It recently issued an extensive list of claims on Addis Ababa, which activists regard as rightfully Oromo too. “The Oromo have never accepted the division of Moyale,” said Ibrahim, the clan elder.

Both sides are pessimistic. One widespread theory is that the federal government’s failure to step in early to end the violence was politically motivated. “People here think the TPLF [the Tigrayan ethnically based political party] initiated this to weaken Oromo resistance to the central government,” said Fugicha. Others have suggested that flashes of ethnic violence suit a regime that defends its heavy-handedness as necessary to prevent the country unravelling.

Whatever the truth, the wider problem is more intractable. Ethiopia’s ethnic-federal model has helped ensure the recognition of minority groups – and kept the peace, many say – but it has also aggravated regional tensions by binding once-fluid ethnic identity to administrative control over territory.

“Federalism brought this problem,” said Adam, the Igad officer. “People now think no one else can live in their area.”