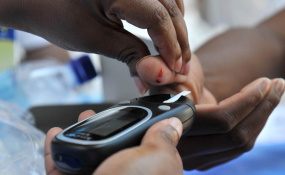 Diabetes as an emerging public health problem posing a looming threat to the public amidst growing burden of Non Communicable Diseases (NCDs).

Diabetes mellitus and hypertension are among the leading causes of outpatient visit or mortality in Ethiopia, according to the Ethiopian Public Health Association (EPHA) while eighty per cent of deaths caused by NCDs occur in developing countries.

Dr. Alula Abebe, an Internist in St. Yared Hospital, says nearly four million Ethiopians are believed to be diabetic excluding people who are not diagnosed. ” The data does not include the sixty per cent who are thought to have not gotten access to diagnosis”.

Alula notes diabetes’ serious health complication is a leading cause for blindness, chronic renal failure, actuation. It also increases the rate of cardiovascular disease by three per cent and decreases life expectancy.

Ethiopia is spending close to half billion USD per anum for the treatment of diabetes. President of the Association Dr. Tewabech Bishaw on the other hand says the international community displays no sense of urgency or outrage about NCDs, the silent killer that is threatening development and economic progress

However, he told The Ethiopian Herald that currently the country is facing a double burden epidemiological risks before accomplishing its task against infectious diseases. Therefore, the increasing impact of NCDs required more effort from the government and other partners beginning from 2012.

The Ministry of Health has taken the initiative and prepared awareness raising document and distributed to all health institutions and other stakeholders.

Raising public awareness, establishing chronic care organizations, building the capacity of professionals and developing preventive measures as well as organizing information and resource sharing systems are major tasks that should be prioritized, according to Dr Alula.

Diabetes globally kills five million people per anum and that is higher than TB, HIV and Malaria by 1.4 million.

Watermelon with toxic skin withdrawn Bama recalls a batch of watermelon from Spain that has too much pesticide residue in...