He Owns Much of Ethiopia. The Saudis Won’t Say Where They’re Keeping Him.

He supplies coffee to Starbucks. He owns much of Ethiopia. And he is known as “Sheikh Mo” in the Clintons’ circle.

But the gilded life of Sheikh Mohammed Hussein Al Amoudi took a sharp turn in November. Mr. Amoudi, the gregarious 71-year-old son of a Yemeni businessman and his Ethiopian wife, was swept up with hundreds of billionaires, princes and other well-connected figures in what the Saudi government says is an anti-corruption campaign that has seized more than $100 billion in assets.

Many other detainees, who were initially kept at a Ritz-Carlton hotel in Riyadh, have been released, including Prince Alwaleed bin Talal, the well-known international investor. Mr. Amoudi’s cousin, Mohammed Aboud Al Amoudi, a property developer, was also let go. 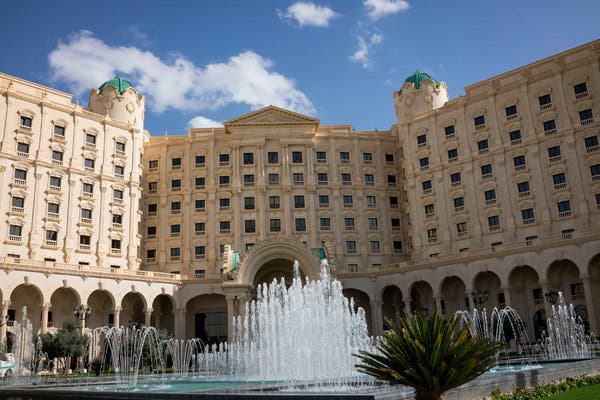 The Ritz-Carlton Hotel in Riyadh last month. Sheikh Mohammed Hussein Al Amoudi was among a number of high-profile figures held at the hotel after a wave of arrests last year. Mr. Amoudi has been moved, but his companies do not know where.CreditTasneem Alsultan for The New York Times

But Mr. Amoudi, once called the world’s richest black person by Forbes, has not been freed, leaving a vast empire that employs more than 70,000 people in limbo. He controls businesses from Ethiopia, where he is the largest private employer and the most prominent backer of the authoritarian government, to Sweden, where he owns a large fuel company, to London, which he has used as a base to set up a number of companies.

“He was in the Ritz-Carlton but we have been told by his family members that he was moved, along with others, to another hotel,” Mr. Amoudi’s press office said in an email responding to questions. “Unfortunately we do not know where. He is in regular contact with his family and is being treated well.”

While Mr. Amoudi lacks a princely pedigree, he is in other ways an archetype of those entangled in the kingdom’s power play: a billionaire with assets stretching across the world who had close ties to previous governments.

The late King Abdullah was a supporter of Mr. Amoudi’s Saudi Star Agricultural Development, a sprawling farming venture in Ethiopia established to supply rice to Saudi Arabia. Such ventures are seen as strategic assets in a desert kingdom keenly aware of its agricultural limitations. While Saudi Star has had a tough time getting going, it is said to be a particular focus of the new government’s interest.

Saudi officials have declined to comment on the charges against individual detainees as well as their status, citing privacy laws.

The Saudi government has said its dragnet followed an extensive investigation by a newly formed anti-corruption committee headed by the country’s crown prince, Mohammed bin Salman. The prince, who has fashioned himself as a reformer, is in the midst of a charm offensive to bolster diplomatic and financial ties to the West and is scheduled to visit Washington later this month.

The detentions, however, have been almost entirely opaque. There have been no signs of collaboration with Western law enforcement and no charges made public, leading some critics to view it as a power and money grab rather than a bona fide anti-corruption effort. Saudi officials have denied that anyone has been mistreated, but people with knowledge of the detentions have said that as many as 17 of the detainees required medical attention because of abuse, and one later died in custody.

Given the insular nature of the country and the crackdown, Saudi officials are likely to make the most headway seizing assets within their own borders. Within Mr. Amoudi’s empire, there is much to sort through.

He moved to the kingdom as a teenager. Although there are few firm details about how a commoner came to vast wealth, he managed to forge influential connections. The most important was Prince Sultan Bin Abdulaziz, who served as defense minister and crown prince before his death in 2011. Mr. Amoudi ran businesses that depended on the prince’s money and position, associates said. Another of his allies was Khalid Bin Mahfouz, a billionaire who later became enmeshed in the collapse of the Bank of Credit and Commerce International in 1991, at the time one of the largest private banks in the world.

In the 1980s, Mr. Amoudi set up Mohammed International Development Research and Organization Companies, a conglomerate known as Midroc. Early on, his biggest deal was a multi-billion-dollar project to build the kingdom’s underground oil storage capacity. Engineering and construction became core businesses for Midroc, but it operates everything from pharmaceutical to furniture factories in the region, according to its website. Mr. Amoudi also owns half of a steel company called Yanbu, and a large chain of gas stations called Naft.

Like another detainee, Mr. Alwaleed, Mr. Amoudi’s reach has extended to the United States. He donated millions of dollars to the Clinton Foundation and offered his private plane to fly Bill Clinton to Ethiopia in 2011. That offer sparked internal debate within the foundation, leaked emails showed.

“Unless Sheikh Mo has sent us a $6 million check, this sounds crazy to do,” Amitabh Desai, the foreign policy director of the Clinton Foundation, wrote in one of the emails.

That was not the first time that Mr. Amoudi’s name had surfaced in the United States. Three years after the Sept. 11 attacks, a lawsuit by the owner of the World Trade Center described Mr. Amoudi as a “material sponsor of international terrorism” because of his funding of controversial Islamic charities. Both sides agreed to a dismissal the following year, and a spokesman for Mr. Amoudi attributed the suit to a case of mistaken identity.

In Ethiopia, Mr. Amoudi’s allies portray him as a philanthropist and champion of African growth.

“I am a Saudi investor, born in Africa, with an Ethiopian mother, of which I am proud,” he said in a speech in Washington in 2014. “I have a special relationship with my birth country by investing in all of Africa — north, south, east, west.”

Sisay Asefa, a professor at Western Michigan University, has known Mr. Amoudi for years and set up a foundation with his support.

“He should be released immediately,” he said. Mr. Amoudi, he added, “has transformed many lives.”

But he has also been a polarizing figure. Mr. Amoudi’s reach in Ethiopia has been so pervasive that a 2008 State Department cable, made public by WikiLeaks, said that “nearly every enterprise of significant monetary or strategic value privatized since 1994 has passed from the ownership of the Government of Ethiopia” to “one of Al Amoudi’s companies.” That called into question the “true competitiveness of the process,” the cable said.

Mr. Amoudi has opened his deep pockets to build a hospital in Addis Ababa and fund AIDS treatment programs. But he has also long backed the Ethiopian People’s Revolutionary Democratic Front, which has ruled the country for more than a quarter-century, angering opposition supporters.

His loyalty to the ruling party has even crossed borders. When a popular expatriate group in the United States called the Ethiopian Sports Federation in North America invited an opposition leader to speak in 2010, Mr. Amoudi set up a rival group.

“When he was imprisoned, it divided public opinion,” said Semahagn Gashu Abebe, an assistant professor of international studies at Endicott College. “The opposition is happy because they think it will greatly weaken the regime.”

But for Ethiopia’s ruling party, he said, “It’s a loss.”

Many see Mr. Amoudi less as a beneficent local son than a Saudi privateer. Some of his mining operations, particularly in a region of Ethiopia called Oromia, have caused resentment, protests and arrests.

“The government and people around the government would definitely miss him,” said Henok Gabisa, a visiting academic fellow at Washington and Lee University School of Law. “I’m sure people from the Oromia region would never miss him because they feel like they were robbed of their natural resources.”

As Mr. Gabisa put it, “Literally his presence and his absence make a huge difference in Ethiopia.”

Time for Political Change and Unity in Ethiopia

by Graham Peebles Tadesse is a 28-year-old Ethiopian from the capital, Addis Ababa. Like thousands of others he took part...