Who will be Ethiopia’s next prime minister?

BBC News   – Ethiopia’s ruling coalition is due to meet soon to choose its next leader. That person will automatically become the prime minister. They will be taking on the role at a time of bitter internal wrangles and violent protests.

Prime Minister Hailemariam Desalegn announced on 15 February that he would resign as both the chairperson of Ethiopia’s ruling coalition EPRDF and as prime minister – a position he had held since 2012.

So that leaves the 180-strong EPRDF council to choose the next prime minister.

The coalition is complex.

While the ANDM and OPDO have roots in Oromia and Amhara regions, which together account for more than half of Ethiopia’s population, it is the minority TPLF from Tigray region that controls the military and security apparatus and is seen as the dominant party in the coalition.

Bitter internal wrangles within the ruling coalition have however made it difficult to predict just who will become the next prime minister.

To make matters worse, the government failed to quell anger when it declared a state of emergency. Demonstrators in the west defied a ban on protests and marches became violent.

The coalition, which has been in power since 1991 after toppling the communist regime, is at a crossroads.

The bitter infighting is between reformists who feel the country is headed the wrong way and conservatives keen on maintaining the status quo and the grip on power.

Here’s a run down of the top seven contenders for prime minister.

He is the current President of the Oromia Regional State and deputy leader of the OPDO.

The charismatic Mr Lemma is seen as a fearless and eloquent reformer. He was once quoted as saying he was ready to go out and join demonstrators if the government did not heed the demands of protesters especially from his region.

The 47-year-old was born and raised in East Welega, Oromia.

Last December he condemned the killings of protesters and the federal security forces’ intervention in the Oromia region without his region’s consent. He has also offered to hold dialogue with opposition groups.

He is deemed as an acceptable candidate who can unify the country but his path to the top seat is complicated. He’s not a member of the federal parliament, the House of People’s Representatives, a requirement to become prime minister.

Last December, a cartoon depicting Mr Lemma as the biblical Moses parting the Red Sea was widely shared on social media, showing just how his popularity “as a man with answers to the country’s problems” had soared.

Despite his meteoric rise within the ruling party and Ethiopia’s complex politics, his critics believe he is too inexperienced to take on the intricacies of the EPRDF.

The current leader of the OPDO, Mr Abiy, is seen as the front-runner in the race to succeed the outgoing prime minister having just been elected to head the party.

He is an astute politician with impressive academic and military credentials.

He was born in the city of Agaro in Oromia and comes from a mixed Christian-Muslim family. The 42-year-old joined the OPDO in the late 1980s.

He has served in the military and rose to the rank of Lieutenant Colonel. He also took part in the UN peacekeeping mission to Rwanda.

He was the founder and director of the country’s Internet Security Agency between 2009 and 2012 after which he became the minister for science and technology.

He is seen by many as outspoken and competent and a person who leans to a participatory leadership style.

Mr Abiy is younger than the other potential leaders and is believed to have huge support among the Oromo youth as well as other ethnic groups.

His critics however say that as an EPRDF insider, he won’t offer much of the change demanded by protesters.

Mr Debretsion was born in Shire, located in the northern Tigray region. He dropped out of his studies at the University of Addis Ababa to join the armed struggle.

During this time he travelled to Italy where he completed training in communications technology. After which he established the regional TPLF radio station known as “Dimtsi Weyane”.

Soon after the EPRDF came into power in 1991, Mr Debretsion served as the deputy to the head of the intelligence bureau.

He has been serving as the Director of the Information and Communication Development Agency since 2006 but also served as a deputy prime minister.

He is the chairperson of the TPLF party and the deputy head of state for the Tigray region as well as the minister for information and communications.

Activists and opposition political parties argue that the TPLF dominates the political power in the coalition, so his election as prime minster would be a controversial move that would be likely to deepen divisions within the coalition and further inflame feelings of exclusion among the Oromo and Amhara communities.

Mr Debretsion is a member of the House of People’s Representatives.

He is the current deputy prime minister.

He joined the EPRDF after university and a few years later became a member of the Amhara region council.

During the mid-2000s he became the deputy chief of the Amhara regional state and a year later became a member of the ANDM executive committee.

Prior to coming to power, Mr Demeke was a teacher and served as the education minister.

Mr Demeke, who is a member of the House of People’s Representatives, is known to be a low-key player in the federal government.

He is a member of OPDO and is the current foreign affairs minister.

Born in the late 1960s, Mr Workneh has served for many years as the commissioner for the federal police commission.

In the late 2000s he was appointed as transport minister, a position he held for four years.

Ethiopia’s current defence minister has been the face of the state of emergencies announced in October 2016 and again in February 2018.

He has constantly appeared on state media articulating the conditions imposed by the state of emergency. 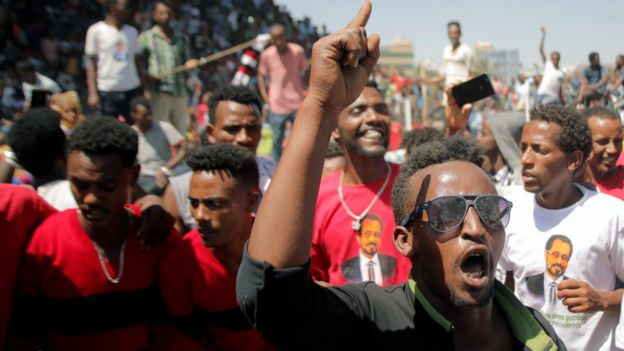 Image copyrightREUTERSImage captionEthiopia has been hit by three years of protests

The sharply dressed but straight-faced politician is seen as one of the least favourite to become the new prime minister.

He is a member of the SEPDM, the same party as the recently resigned prime minister and has just been announced as its deputy leader, further complicating his ascendancy to power.

Some analysts say his party might argue that Mr Hailemariam never finished his term and therefore might suggest that Mr Siraj or someone from within SEPDM for the premiership. This is however highly unlikely.

He is currently working with the secretariat of the EPRDF, previously he was the minister of education, and president of the southern Ethiopia regional state. 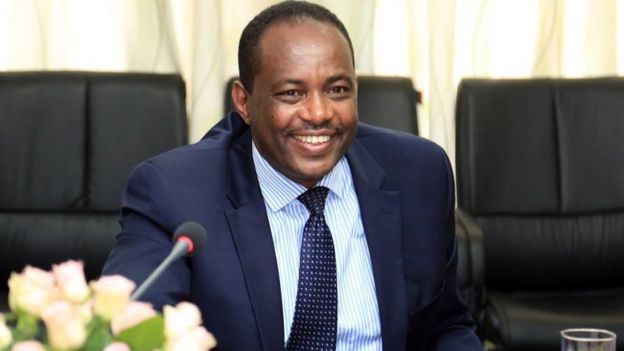 Born in Haroressa, in the southern Ethiopia region, Shiferaw was a teacher before joining politics.

When the outgoing prime minister was still the region’s president, Mr Shiferaw was deputy president of the southern Ethiopia regional state government.

Some people say his election as the chairman of the SEPDM was intended to enhance his chances of becoming prime minister.

Mr Shiferaw is a member of the federal parliament from which the prime minister will be elected.