Can Ethiopia’s New Leader, a Political Insider, Change His Country from the Inside Out?

LOS ANGELES — On the morning of his first day of school, when he was 7, Abiy Ahmed heard his mother whispering into his ears.

“‘You’re unique, my son,’” he recalled her saying. “You will end up in the palace. So when you go to school, bear in mind that one day you’ll be someone which will serve the nation.”

With that preposterous prophesy for a boy growing up in a house without electricity in a tiny Ethiopian village, she kissed him on his head and sent him on his way.

Mr. Abiy, now 42, not only ended up in the prime minister’s palace. He has also become the most closely watched leader in Africa: a man who says he wants to to change his country from the inside out — and fast.

After taking office in March, he officially ended two decades of hostilitieswith Ethiopia’s longtime rival and neighbor, Eritrea. Beyond that, he started loosening a tightly controlled state-run economy, pledged multiparty elections in a country long known for jailing dissidents, and began wooing the government’s most strident critics: members of the Ethiopian diaspora, who have long organized insurgencies from afar. Leaders of a previously outlawed opposition group returned to the capital on Saturday.

The task is enormous. Ethiopia is Africa’s second most populous nation, with more than 100 million people, in a part of the continent where world powers are scrambling for influence. 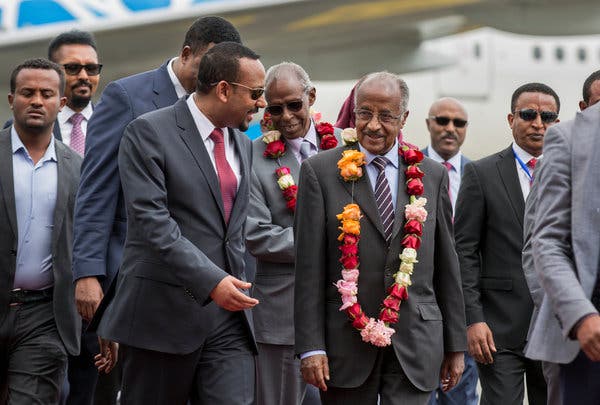 So are the risks: millions of disaffected youth, widespread poverty, a violent struggle over resources among Ethiopia’s competing ethnic groups, and a range of detractors from inside and outside the government who are either threatened by too much change — or angry that it’s not enough.

Mr. Abiy’s changes are a major departure for Ethiopia, which has long relied on a government model that resembles China’s, emphasizing state-led economic growth and a suppression of political dissent.

But Mr. Abiy knows his country is overwhelmingly young, with a median age of 18 and a thirst for economic and political freedom.

“Closing the door is the worst approach,” he told The New York Times in Los Angeles in between bridge-building meetings with Ethiopians living in the United States.

Many of Mr. Abiy’s promises remain just that. He has yet to lift restrictions on civil society, and it’s unclear how multiparty elections can be held, as he has promised, in a country where the governing coalition and its allies have sweeping control over almost all institutions — and hold every seat in Parliament.

Representative Karen Bass, a California Democrat, who met with Mr. Abiy in late August, lauded his changes but warned of the risks of soaring demands. 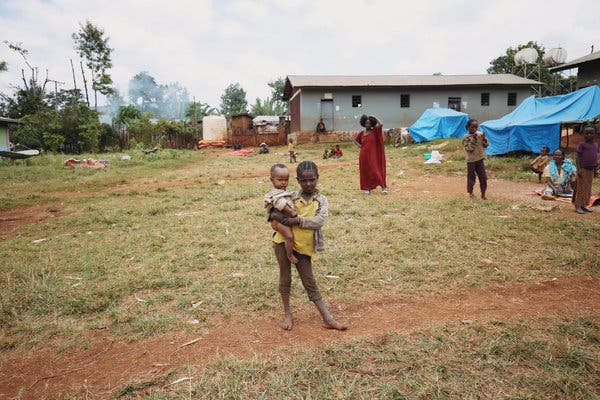 An internally displaced child carried his sibling at their camp in Chelelektu, Ethiopia, in August.CreditTiksa Negeri/Reuters

“He has delivered, but if life doesn’t change for everyone, people get impatient,” she said. “People have unrealistic expectations.”

“Build bridges, break down walls,” is a constant refrain in his speeches, urging Ethiopians to step across religious and ethnic fault lines to view one another as compatriots, instead of rivals.

“We just blame each other,” he said in the interview, barely concealing his distress. “We just hate each other.” He calls it “group thinking.”

The difficulty is on stark display in the country’s south. Interethnic violence, mostly over land, has left nearly a million people displaced from their homes.

Nearly 1 million people have been driven from their homes by inter-communal clashes in Ethiopia.

Many live in difficult conditions, sheltering in schools and factories, with little food or clean water.#Media: Raw footage illustrates their harsh reality: http://ow.ly/yeN030lvYHv

Mr. Abiy embodies Ethiopia’s mixture. His father was Muslim and Oromo. It is the nation’s largest ethnic group, but has long been marginalized. His mother was Amharic and Orthodox Christian, and she converted to Islam when she married. 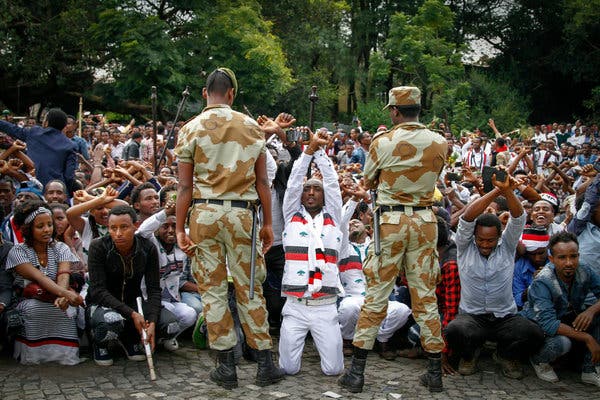 Ethiopian soldiers attempted to stop protesters in the Oromia region of Ethiopia in 2016.CreditAssociated Press

Mr. Abiy became a Protestant. He speaks of “the ideals of love, forgiveness and reconciliation.” 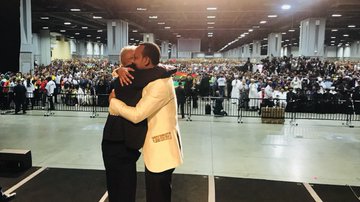 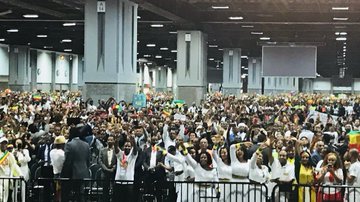 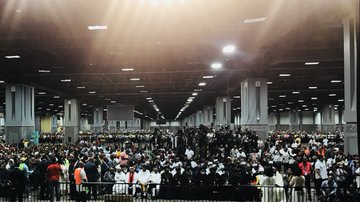 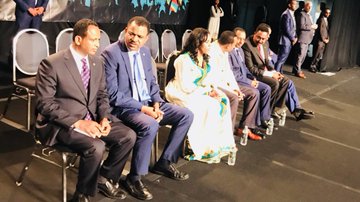 Politically, Mr. Abiy is a consummate insider. He joined the army at age 13 and went on to create the government cybersecurity agency in a country with a tight leash on the internet. He also joined the governing coalition that overthrew military rule in 1991 and has run Ethiopia ever since. His party, the Oromo People’s Democratic Front, has played something of an internal opposition role within the coalition.

Rather than hiding his mother’s whispers, he says he advertised them.

“One day I’ll be your boss,” he recalls saying to senior officials, even when he was a midlevel government functionary.

Then, last year, protests by young Oromos, fed up with a government dominated by smaller, more powerful ethnic groups, nearly brought the government to its knees. The former prime minister, Hailemariam Desalegn, resigned. Mr. Abiy, an Oromo, was elevated to the post, in large part because he was seen as having the best chance to cool the protests and hold the country together.

Immediately, he apologized for the killings of protesters by government forces. He lifted the ban on opposition groups and pardoned one of his country’s most high-profile political prisoners.

Peace with Eritrea was a priority. He asked those who had contact with Eritrea — one of the most diplomatically isolated countries in the world — to reach out on his behalf. He wanted to talk. 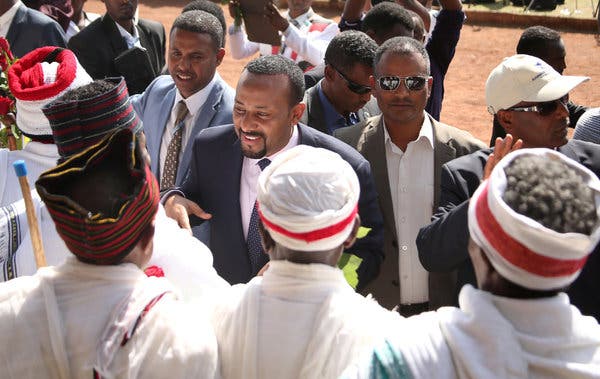 Mr. Ahmed arrived in the Oromia region for a rally in Ethiopia in April.CreditTiksa Negeri/Reuters

Mr. Abiy said one of the biggest priorities for the crown prince was peace between Ethiopia and Eritrea and he was careful to add that he had also spoken to several African leaders.

The breakthrough in the standoff came from Mr. Abiy’s side. In early June, he agreed to hand over a disputed border town to Eritrea, a sticking point for 20 years.

The next month, the two countries officially declared an end to their war. By mid-July, the longtime Eritrean president, Isaias Afwerki, visited Ethiopia for the first time in two decades. In a gesture of good will, Mr. Abiy gave him a camel, Eritrea’s national animal. In September, border crossing points reopened, paving the way for trade.

Camel is a national emblem of the State of Eritrea. In Hawassa, HE PM Dr Abiy presented to HE President Isaias—to the cheer & applause of those who’r present —a gift of a live Camel, all wrapped with #Eritrea-n& #Ethiopia-n flags& flowers as a symbol of the blossoming friendship.

Mr. Abiy says he does not want to remain in the palace forever. He has promised competitive elections plus term limits for the prime minister.

“I’m not a king,” Mr. Abiy said. “My ultimate objective is to see democratic elections in Ethiopia. If that happened, I’ll feel I fulfilled my objective.” 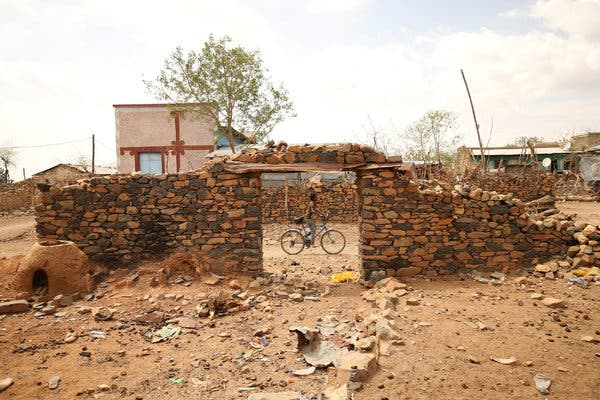 A boy rode a bicycle past houses damaged during the Ethiopia-Eritrea war in Badme, a disputed territory between Eritrea and Ethiopia, in June.CreditTiksa Negeri/Reuters

Opposition political parties are now free to operate, but Mr. Abiy has not said when and how he will lift laws that restrict how civil society groups function.

“We’ll give them rights to operate in our country. Also we will give them responsibility because group thinking is there, emotion is there,” he said. “Our door is open, but we will watch our door.”

Leenco Lata, a political dissident who returned to Ethiopia recently after a quarter century in self-imposed exile in Oslo, credited the new prime minister for trying to change the system from inside — something he has never seen in the country before.

“There is a struggle within the government, and the pro-reform wing is having the upper hand,” said Mr. Lata, who heads a political organization called the Oromo Democratic Front.

“I believe in this government’s commitment to institute democratic order in this country. But I’m worried because the obstacles are huge,” he added. “The country’s deep seated autocratic culture needs to be reformed.”

Mr. Abiy faces entrenched resistance at home — in the security services and the political parties that have long held power. But he came to the United States to remove a longtime thorn in the side of Ethiopia’s leaders: its exiles. 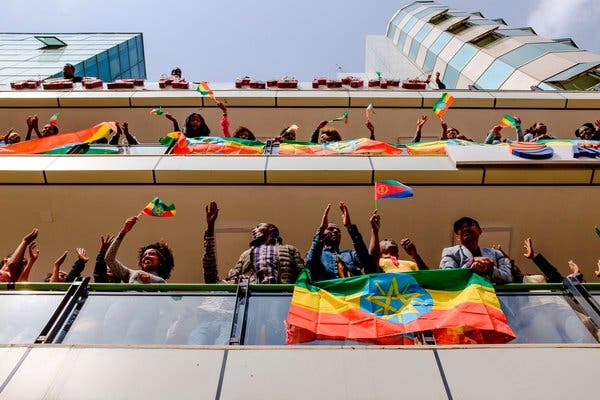 “The chaos, the crisis, the conflict in the nation, somehow, it is related to the diaspora,” he said. “That negative energy operates in destroying our country.”

To win over dissidents abroad, he is appealing to their homesickness.

Around 23,000 Ethiopians abroad were effectively barred from coming home because of their political activities. Mr. Abiy lifted those restrictions.

In a sign of that new openness, he said that Ethiopians abroad — thousands of whom hadn’t set foot in the country in years for fear of arrest — would be able to come home visa free for the Ethiopian new year.

“The diaspora, most of them, they live here physically but their soul is there. Virtually day and night they are in Ethiopia,” he said. “They never expect to come to Ethiopia, to be invited to Ethiopia.”

He then headed to a rally to address them in a basketball arena at the University of Southern California, part of his three-city tour of the United States.

The bleachers were packed. Some wore his face on their T-shirts. One woman had inserted two flags into her hair — one Ethiopian, the other Eritrean. They ululated when Mr. Abiy approached the dais. “Abiy, Abiy,” they chanted in unison.

The prime minister beamed in a white blazer with lapels embroidered in black. He waved, touched his heart with his hand, preached.

“Instead of hating and holding grudges, we need to come together in peace and love,” he told the crowd.

“When are you going to help Ethiopia?” he asked and them urged them to contribute what he called their “macchiato money” — at least a dollar every day — to help Ethiopia prosper.

And then he listened. One after another, dozens of Ethiopians came forward to pour out their grievances. Abraham Agonafer, a shuttle driver from Vancouver who had flown here to demand answers, took the mic, wearing the pictures of four young men on his T-shirt. They were students who had disappeared many years ago, he said. He wanted the prime minister to find out what happened.

“That’s why I came all this way,” the man said later. “His reforms, they give me hope.”