Ethiopia, Eritrea, Saudi Arabia and the UAE – Winds of change in the Gulf

Ethiopia and Eritrea didn’t pen their peace agreement in Addis Ababa or Asmara, but in Saudi Arabia with the Emirates alongside. Are economic and military interests increasingly binding Gulf states and the Horn together? By Sella Oneko

The Red Sea, which separates Africa from the Arabian Peninsula, is just 355 kilometres wide at its broadest point. The major shipping route could be an economic treasure trove for any regional power. Yet for the last ten years, the water route spanning the Gulf of Aden in the south to the Suez Canal in the north has been a difficult one to navigate. Somali pirates, border disputes between Eritrea and Djibouti, landlocked Ethiopia’s attempt to gain Red Sea access and the 3-year-old war in Yemen have made the region volatile.

It’s therefore no wonder that the 2018 peace deal between long-standing belligerents Ethiopia and Eritrea was warmly welcomed in the region. For allies Saudi Arabia and the United Arab Emirates (UAE) it was a triumph. The two Arab Persian Gulf states brokered the peace accord between the Horn of Africa neighbours in the Saudi city Jeddah. Moreover, they also got Djibouti to sit down at the negotiation table with its border rival, Eritrea.

The Jeddah Peace Agreement signed today before the CTHM is a historic milestone for the peoples of Ethiopia and Eritrea and will contribute to strengthening security and stability in the region at large pic.twitter.com/rkfUeP5rOw 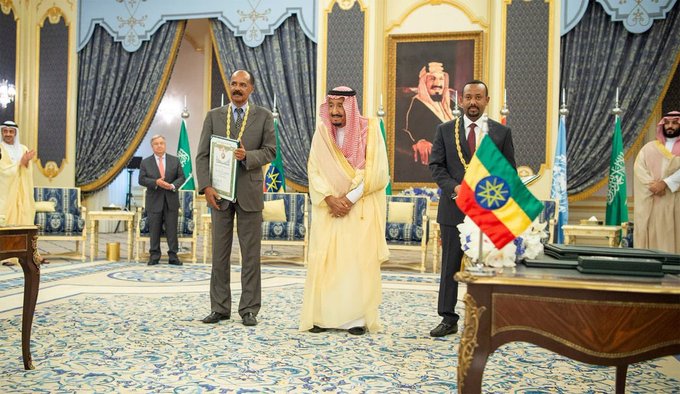 These hopeful winds can also be seen as winds of change. According to analysts, Saudi Arabia and the UAE are jointly positioning themselves as the major power houses among the Arab states of the Persian Gulf.

Alex de Waal, who runs the World Peace Foundation think tank at Tufts University in the U.S., sees Saudi Arabia’s push for economic dominance as a method of security. “About 10 years ago the Saudis began developing plans for a Red Sea fleet and controlling the Red Sea,” he said. “Part of the reason for that was the fear that if the Iranians were to block the Strait of Hormuz [waterway exit from the Persian Gulf between Iran and the UAE], the Saudis would need an alternative outlet for their oil. So they started constructing pipelines and oil refineries on the Red Sea coast, therefore needing security at both ends of the Red Sea.”

Elizabeth Dickinson, an analyst on the Arabian Peninsula with the International Crisis Group, also thinks the Saudi Kingdom is stepping up its international political involvement. “Saudi Arabia is a major donor and sees Africa as a new diplomatic priority.” The analyst sees the Emirates as acting in a similar vein. “The UAE has positioned itself as a major potential investor in logistics, ports and trade development,” she explains.