Friends and family are fearing for the life of a 28-year-old Ethiopian woman who has spent more than three months in a Chinese prison on drug charges.

In December, Nazrawit Abera, a civil engineer, flew from Addis Ababa to Beijing to pursue a job opportunity and learn about home building materials, according to her older sister, Abby Abera.

Abby told VOA the bottles did not belong to Nazrawit, and that her sister had agreed to bring them as a favor to a friend from elementary school who had planned to accompany Nazrawit.

When the friend’s father died shortly before the trip, she allegedly asked Nazrawit to bring the bottles on her behalf. She told Nazrawit they contained expensive Brazilian shampoo, according to Abby.

Abby said what followed has been a nightmare for the family. They have been unable to speak to Nazrawit and have received scant details from representatives of the Ethiopian consulate, who met with Abby several times.

“We don’t have any information that says she will be released. What we know and what we have heard is whatever happens will be based on Chinese laws,” Abby told VOA by phone in Amharic. “So our guess is that, based on Chinese laws, there is a possibility that she could be facing the death penalty. She is getting ready to appear in court. All of the family is counting every single second and is stressed.”

Under Chinese law, drug smuggling can result in punishments ranging from 15 years in prison to the death penalty. 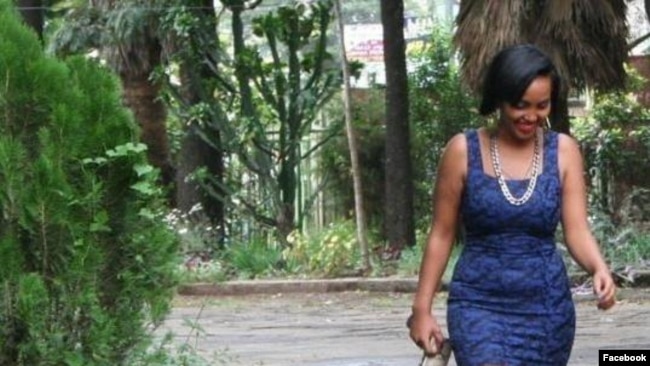 Photo – Nazrawit Abera is seen in an undated photo published on her Facebook page.

In a March 26 statement in state-owned media, the Ethiopian Foreign Ministry said it was closely monitoring the situation and cautioned the public against jumping to conclusions, saying Nazrawit had not yet been sentenced.

Sophie Richardson, the China director at Human Rights Watch, said cases like Nazrawit’s can result in dire outcomes. China is one of only a handful of countries, including Iran, Saudi Arabia and Singapore, that executes people for drug crimes.

“I can tell you that the Chinese government has a particularly low tolerance for anything involving drug trafficking, particularly when it involves foreigners and tends to treat those kinds of cases fairly mercilessly,” Richardson said.

Richardson recalled an incident in 2009 when a British citizen, Akmal Shaikh, was persuaded by someone in Pakistan to smuggle drugs into China. Despite claims that had a mental illness, Chinese authorities denied him a psychiatric evaluation, convicted him and executed him by lethal injection.

“The government does not really live up to international standards on fair trial rights and the death penalty,” Richardson said. “There are still, I think it is 55 different charges under Chinese laws that can carry the death penalty, and many of those are not violent crimes.”

“The law in China really depends more on what the [Communist] Party thinks than what the judges think,” Holzman said.

Holzman added that there’s little transparency when the government implements the death penalty. Estimates on how many people are executed annually range widely, from 1,000 to 10,000, she said.

“We know they execute a lot. But we don’t know the quantities. And that’s a state secret that is very, very well kept,” she added.