Time of Israel – A top Iranian general, blamed by Israel for masterminding a preempted bid to launch drone attacks from Syria, warned Israel on Sunday that its strikes against Iran would not be tolerated much longer.

“These insane operations will surely be the last steps of the Zionist regime,” tweeted Qassem Soleimani, commander of the Quds Force of the Islamic Revolutionary Guards Corps.

Israeli fighter jets late on Saturday carried out airstrikes in Syria to thwart a planned attack on Israel by operatives from the Revolutionary Guards as well as Shiite militias who had been planning on sending “kamikaze” attack drones into Israel armed with explosives, the army said.

“Israel is acting to strike the head of the Iranian snake and uproot its teeth,” Katz said in a Ynet news site interview. “Iran is the head of the snake and Qassem Soleimani, the commander of the Revolutionary Guards Quds Force, is the snake’s teeth.”

Katz said Israel’s airstrikes to thwart the drone attack “conveyed a clear message to Iran and all its supporters that they are not immune from attack, no matter where they are.” 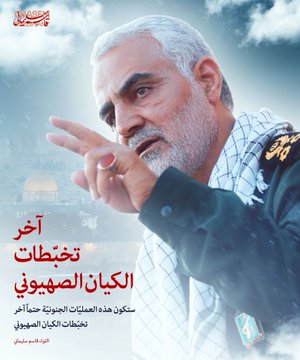 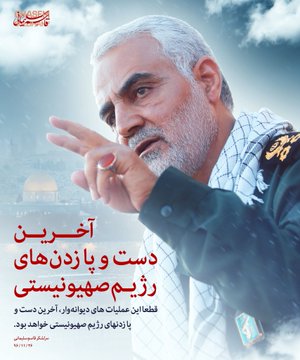 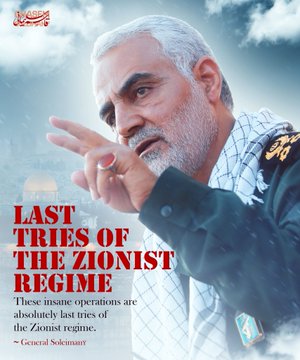 659 people are talking about this

The tweet late on Sunday, from an account widely associated with Soleimani, appeared to be his first public reaction and came hours after Hezbollah leader Hassan Nasrallah threatened Israel with a reprisal attack after two of its members were killed in the Israeli strike in Syria, and two UAVs crashed in and around the terror group’s Beirut offices in an incident also blamed on the Jewish state.

“From tonight, I tell the Israeli army on the border, be prepared and wait for us,” said the Hezbollah leader in a televised address, taunting that a retaliation could come in “one day, two days, three days…”

Israeli forces in the north have been put on high alert, amid fears of a reprisal attack, and Prime Minister Benjamin Netanyahu held an emergency meeting with defense officials overnight Saturday-Sunday amid the heightened tensions.

The Israel Defense Forces said it does not comment on “foreign reports.”

Several well-connected Israeli commentators, including a former IDF general, said the drones in the Beirut incident appeared to be of Iranian origin. 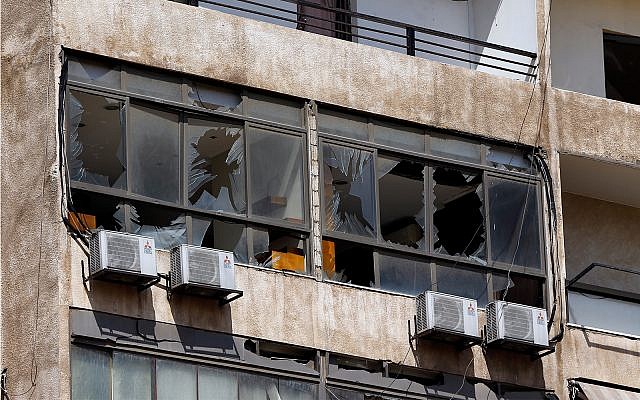 “What happened last night was very dangerous,” said Nasrallah in an address delivered to supporters via video; the terror chief is in permanent hiding from potential Israeli attack.

He denied that Hezbollah had downed the drones in Beirut. Rather, he said, youths threw rocks at a reconnaissance UAV, which subsequently fell to the ground. A second “suicide” UAV then appeared and attacked a specific site in the area, claimed Nasrallah.

The Hezbollah chief said the UAVs were “a violation of the rules of engagement” that ended the 2006 Second Lebanon War between his terror group and Israel.

“This is the first act of aggression since August 14, 2006…. This is a clear aggression,” he declared.

The leader of the Iran-backed terrorist group also called Israel’s alleged foiling of an Iranian-backed drone attack from Syria on Saturday night a “clear act of aggression,” said two Hezbollah fighters were killed in the attack, and vowed to blow Israeli UAVs out of the sky if they were to ever cross into Lebanese airspace.

“The time — in which Israeli planes come and bombard a place in Lebanon and the usurping entity of Palestine remains secure — has ended,” he declared. “From now on, we will confront the Israeli drones in Lebanon’s skies… and we will take action to bring them down.”

The terror group leader’s speech came a day after the Israeli Air Force bombed a compound in central Syria that the IDF said was used by the pro-Iranian fighters as their base of operations, after they tried to launch attack drones laden with explosives at Israel for a second time. 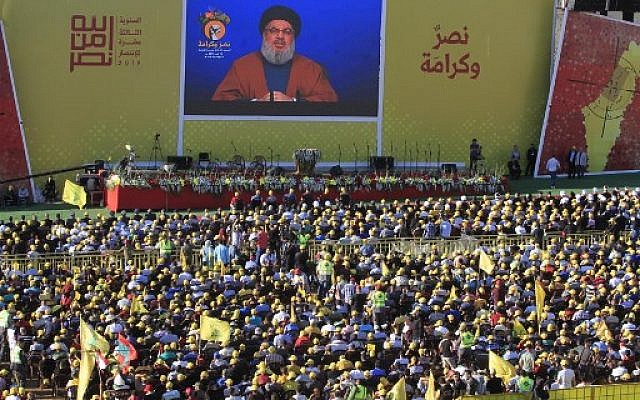 Nasrallah accused Prime Minister Benjamin Netanyahu of lying when he said the compound in Syria targeted in the Israeli strike was being used by Iran’s Quds Force for drone attacks on Israel.

“Netanyahu and the enemy’s army announced that an al-Quds Force center was attacked and those attacked were Iranians. He did all that and presented himself as national and brave hero… He is lying to his people. He is selling them nonsense and is going against the facts on the ground,” Nasrallah said. 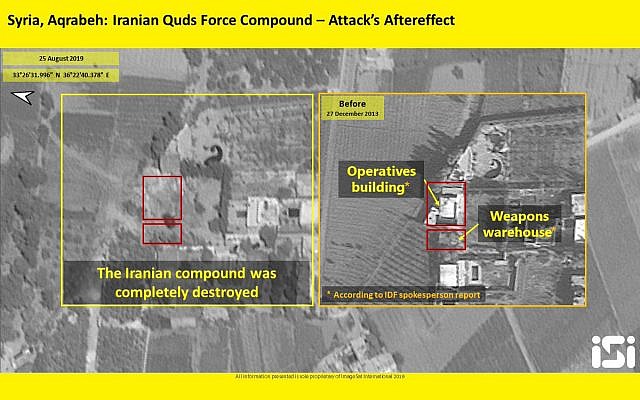 He claimed that the compound targeted had been merely a “house.”

“It wasn’t a military site. It was a house… The place that was bombarded only had Lebanese youth from Hezbollah. In that place, two martyrs fell,” he explained, identifying the victims as Hassan Yousef Zabeeb and Nasser Ahmad Daher. 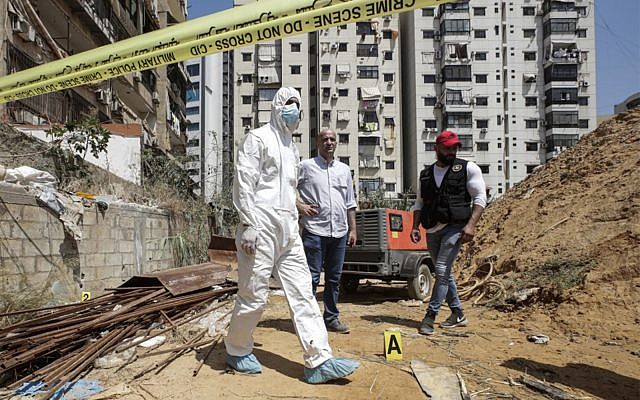 Lebanese military intelligence inspects the scene where two drones came down in the vicinity of a Hezbollah media center in the south of the capital Beirut, August 25, 2019. (Anwar Amro/AFP)Hezbollah, a terror group funded by Iran and sworn to Israel’s destruction, last fought a war with the Jewish state in 2006. In recent years, the Iran proxy has shifted its troops into Syria to back its ally, Syrian dictator Bashar Assad, in the years-long civil war.

There have been few direct clashes between Israel and Iran in Syria. In May 2018, Israel said Iranian forces fired some 20 rockets at Israel, with most being shot down or failing to reach Israeli territory. In response, Israel carried out extensive airstrikes on Iranian positions in Syria.

While Israel has acknowledged carrying out hundreds of airstrikes inside Syria against weapons transfers to Iran-backed fighters and to keep Iran from gaining a foothold there, it rarely acknowledges individual strikes.

The ambiguity is part of a strategy seen as helping give Tehran and Damascus cover from needing to strike back to save face. Israel has appeared to apply the same strategy in Iraq, where the IDF has been reported to have carried out a number of strikes on Iran-backed militia positions near Baghdad.

Judah Ari Gross and Adam Rasgon contributed to this report.

(Reuters) - Ethiopian lawmakers on Saturday revised election laws to pave the way for polls next year, but some opposition...